What is the Difference Between M.D. and D.O.?

When choosing a pediatrician for your child, will you pick an M.D. or a D.O.? What's the difference between the two? We answer these questions and more. 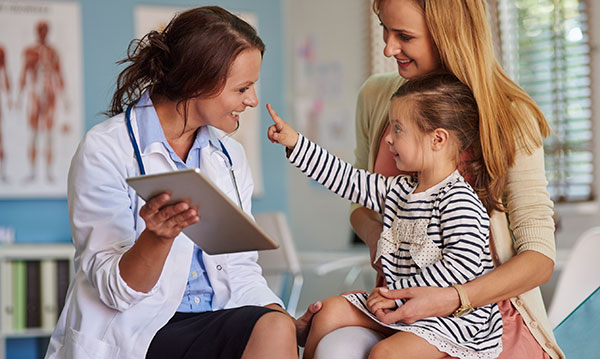 It’s so important to pick a pediatrician that is the right fit for your family. No doubt you’ve done lots of searching for “best pediatricians near me.”

But during your search for local docs, have you ever wondered why some have an “M.D.” after their name while others have a “D.O.?”

What is the difference between M.D. and D.O., and which should you pick as your child’s pediatrician? When it comes to caring for patients, there isn’t too much of a difference – though there is a distinct differentiator.

Difference between M.D. and D.O. doctors

“Osteopathic medicine has a philosophy,” explains Kari Hortos, D.O., who is the associate dean and chief academic officer for the Michigan State University College of Osteopathic Medicine – the only school of its kind in the state. That focus, she says, “is based on what’s called the osteopathic tenets.”

“The first is that when you look at a person, they are an entire person – body, mind and spirit. That’s actually the wholeness of who they are,” she says. “No. 2 is that we believe that the body has an inherent ability to self-regulate and heal itself, so we want to make sure we are supporting that process.”

The third is that structure and function go hand-in-hand. Her example of this is if somebody has a well-balanced, nutritious meal in front of them, it doesn’t do any good if they cannot eat it because of painful dental issues.

The fourth is using “rational treatment” while taking the whole body into account, notes the American Osteopathic Association.

“We are trained in health promotion. People of course get sick, and it’s not that we ignore that they get sick. We prescribe whatever makes sense for that person,” Hortos says, adding D.O.s will consider, “are there other things that we can look to treat?”

“Using OMT, your osteopathic physician will move your muscles and joints using techniques including stretching, gentle pressure and resistance,” the AOA notes.

There’s not a difference when it comes to medical knowledge and certifications between these two types of doctors.

“We are fully trained in the medical field with the additional mindset or philosophy of looking at health promotion and looking at the whole patient – and if it makes sense, we may do osteopathic manipulation,” Hortos says.

“They’re licensed exactly the same way from the state of Michigan,” adds Dr. Rita Patel, M.D., a pediatrician and associate program director for the pediatric residency program at Beaumont Hospital in Royal Oak.

Even the training is basically the same. “Osteopathic physicians go to med school for a total of four years just like the M.D. schools. We take all of the same classes and have very similar rotations,” Hortos says.

Patel says recently, the residency program for D.O. doctors merged with the one for M.D.s, which means both types of students are getting the same training.

Clearing up the myths

Patients may not even notice the difference between a D.O. or an M.D. because there are so many similarities between them.

Patel says throughout the hospital, it’s not even apparent to her who is a D.O. and who is an M.D. They all work in the same environment together. “I usually don’t even know who’s who,” she says. “It’s not something that you really even think about.”

M.D.s and D.O.s can pursue specialties, perform surgeries, prescribe medication and treat all of the same ailments. A misconception some people have is that D.O.s are “trained less,” Hortos says. “That’s not the case at all.” They have full licensure and residency training – just like M.D.s.

“(The) bottom line: it’s a philosophy we look to,” she says. “You’ll find D.O.s can be any specialty out there. In fact, we’ve got them in all the specialties.”

And just because that’s part of a D.O.s training, that doesn’t mean you won’t find an M.D. who follows a similar philosophy, Hortos emphasizes.

When conducting your pediatrician search, which you choose comes down to convenience and what feels right for you as the parent. Both Patel and Hortos agree convenience is a big factor.

“Just hours, is of course, very important in making sure that they’re available when you need them,” Patel says. “If you call after hours, who are you going to talk to?”

Also, Patel says, does the doctor listen to you? Do you feel comfortable with that doctor? Do they explain things in a way that makes sense to you? Do you trust them? Asking yourself those questions can help you decide.

“They’re pretty interchangeable,” Patel says of M.D.s and D.O.s. “(I) guess it’s just more of who is a good fit for you as far as what you’re looking for in terms of a pediatrician.”

And, it’s up to the parent if they feel either an M.D. or a D.O. philosophy better aligns with their family.

Ultimately, parents can’t go wrong with either doctor. But if you need more help choosing, check out some questions to ask a new pediatrician to help narrow down your options.