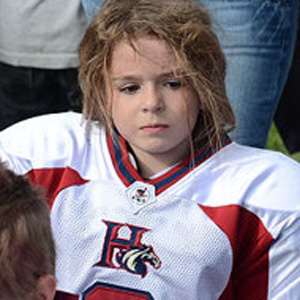 Sam Gordon’s older brother played football. When her brother ran drills, she would run, too. She was faster.

When her brother’s coaches heard this, they asked Sam if she wanted to join in on practice to see who could outrun her. When she flew past boys two years older than she was, an idea was formed.

Sam, now 9, was brought on to the Salt Lake City area “Gremlins” tackle youth league. The rest is YouTube history.

Getting over 2 million views in just a few days, this video compilation of Sam escaping tackles and running touchdowns has grabbed the attention of a lot of people.

Her father Brent – who assembled the video, set to a punky soundtrack with complementary kick-butt female vocals – admitted in an interview with Yahoo Sports that Sam had a some trouble adjusting to playing with all boys at first. “She had a little bit of a struggle,” he told the blog. “The team lost a couple of games. Since she was the primary ball carrier; she felt a lot of pressure to win. She felt blame for losing.”

Some of the kids she plays with are twice her size, the article noted – including a 150-pound kid nicknamed “Tank.” Yikes.

But her father reports that Sam got really shaken by a hit only once. She rested for a few plays, went back in and scored a touchdown.

“Some kids, right before the contact, they stop,” Sam told her father, Yahoo Sports reported. “I don’t. I just hit ’em.”

Her skills are truly undeniable. Running through walls of defending players, she emerges unscathed, sprinting towards the end zone.

“She could cut and follow blocks like a college football player,” says Chris Staib, one of the coaches, in the article. Staib also says he doesn’t think that the hard hits are a problem, adding that Sam loves tackling (and even tries to take down Tank when she has the chance).

“I keep questioning myself,” Gordon says in the Yahoo Sports story. “Am I just being a crazy dad here? Or is this really cool?”

It’s obvious Sam enjoys playing tackle football, but others who have seen the video think perhaps the heavy hitting may be too much for someone of such small size.

“It won’t be so ‘amazing’ when some kid puts her in the hospital,” opines one concerned viewer.

“She’s in for a rude awakening in middle school,” says another commenter – inferring that once Sam hits puberty, more of the boys may outgrow her.

Others are a bit more supportive of the little running back.

“I think a lot of people commenting on this can’t deal with the fact that a girl is better at football than boys,” says one commenter. “It’s sad that they have to bring her down.”

And another viewer pleads, “Parents (of) this girl, please let her run track. She’s a prodigy.”