Alicia Silverstone Chews Son's Food – and Spits It into His Mouth 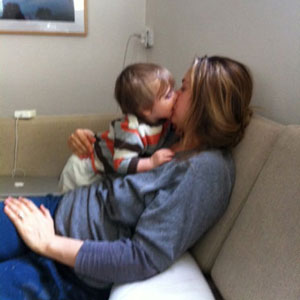 Goodbye, Gerber. Seems actress Alicia Silverstone is feeding her toddler son a sophisticated mash-up up of rice cake and veggies – turning it into baby food by personally pureeing with her teeth before hocking it into the tyke's open mouth.

The brief home video, posted the celeb's blog, The Kind Life with Alicia Silverstone, features the Clueless star on a couch with her kid, scooping a bite of her Asian breakfast from blue bowl. She chews; then leans down to pass on the masticated mass of food. It takes a few tries for her wobbly 10-month-old to get it. But Bear Blu – yep, that's the little guy's name – is soon latched onto mom's mouth and chomping away.

"(F)rom my mouth to his," blogs Silverstone, who says she selectively ground-up a bit of mochi and miso-soup vegetables. "It's his favorite… and mine. He literally crawls across the room to attack my mouth if I'm eating."

The bizarre lip-lock between mama bear and cub is, as HuffPost puts it, "actually a thing" – and the practice, aka "kiss feeding," is indeed practiced in some cultures. And Silverstone, an outspoken vegan and animal rights activist who once shot a nude ad for PETA, certainly isn't shy about raising eyebrows.

But some are crying that her child-feeding method is for the birds – if not downright clueless. Baby might be getting a few extra slimy nutrients, granted. However, some heath care professionals say parents also risk passing on diseases (particularly HIV-AIDS and hepatitis B) or even certain types of prescription drugs through their saliva.

Comments on Silverstone's blog post alone have swirled plenty of debate – over kissing kids (it can spread cavities, one hygienist points out), potentially creating immunities, and even whether the actress is flossing. Yet there's a definite thread of applause, peppered with words like "bonding," "beautiful" and "natural." One even chimed in with cultural perspective.

"Being a Native American, we have done this for our children for centuries, and no doctor has been able to prove there are negative effects of this feeding method," wrote Dedo Lewis-Seoutewa. "In our culture, it is used to promote the child a better appetite and a greater liking of all foods (the taste, the texture… everything)."

Still, a kid isn't a bird, argued India's the Economic Times – even if he's named after a wild animal.

"Humans, particularly movie stars, can wear feathers, fly and live in nests," it observed, "but introducing their offspring to the joys of Japanese food via regurgitation as Silverstone did is surely not necessary in this age of ready-pureed baby food in all sorts of exotic flavours."

Then again, there's always breastfeeding – which Silverstone also does, and, naturally, caused another stir with just a few days later.

Maybe it's true what her Clueless character Cher said, after all: "Anything you can do to draw attention to your mouth is good."