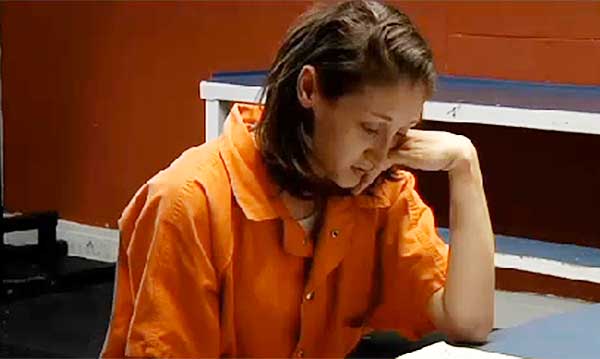 A woman in Kentucky was arrested after trying to give her 1-year-old nephew rum and beer during a celebration of Kentucky’s NCAA win last weekend, according to reports.

Police say Angie Spoonamore took the boy to a party in Garrard County to watch the UK-Notre Dame game on March 28 and at some point gave the baby beer and rum in his sippy cup, Wave3 News in Louisville, Kentucky reports.

She also allegedly threw her nephew to the floor and he was taken to the hospital with an injured lip, Wave3 reports.

Though she admitted she was drunk, Spoonamore apparently doesn’t remember the incident and told TV news station WLEX during a jailhouse interview that she finds it hard to believe she gave the toddler alcohol or hurt him, according to a Huffington Post article.

She also referred to the boy as her niece at some point during the party, HuffPost reports.

The toddler’s mother – who is Spoonamore’s sister – said that her son did not drink the alcohol and suffered no significant injuries, according to WYMT-TV.

Spoonamore was arraigned March 30 on charges of wanton endangerment, endangering welfare of a minor and criminal abuse, according to reports. She entered a not guilty plea and a preliminary hearing is set for April 7.

Some readers tried to make light of the awful situation on Monday, including this comment from Matt Kornfeld on Huffington Post: “Kentucky victory celebration with rum? Of course that is criminal. It is supposed to be bourbon.”

Others asked police to also look into the boy’s mother. “The mother wasn’t worried about her sister’s behavior? Maybe her house should be investigated as well.

Doesn’t sound like that poor baby has any good relatives,” Sonja Gatlin commented.

Trina Spees Welke made this comment on the Wave3 article: “If I were this child’s mother, he would never see his aunt again.”

What do you think of this ordeal, Metro Parent readers?