Fresh air, sunshine and a place to play – suspended stories above the pavement. Check out this weird parenting invention circa the 1930s. 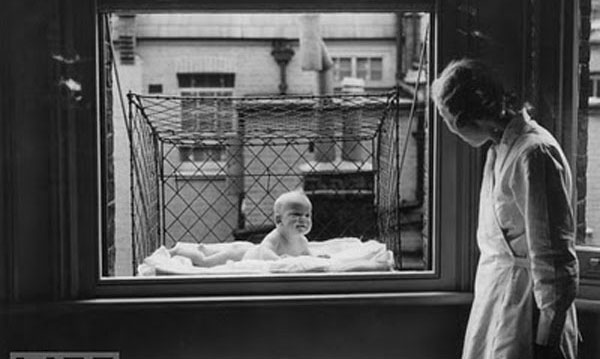 I typically associate “jail bird” with orange jumpsuits, shackles and the like. And “dangerous baby stunt involving an open window” brings to mind that footage of Michael Jackson dangling “Blanket” over a hotel balcony.

Clearly, I had not heard of the short-lived parenting craze that was the baby cage. See, during ’30s era London, some mums and dads opted to let their cherub-cheeked toddlers crawl around in a metal cage affixed to the window frame. Passersby strolling the tenements who peered up might have spotted a small child hanging out mid-air, boxed in by fence-style mesh.

We can credit good ol’ American ingenuity at work – in particular, that of Emma Read of Spokane, Wash. It was her 1923 patent for a “Portable Baby Cage” that set the stage. Ms. Read worried about babies and small tykes growing up in crowded cities – and, as her patent put it, “not obtaining the proper fresh air, as well as being outdoors, for such air and exercise.” Apartments didn’t have always have access to outdoor space to romp around – and those living spaces certainly didn’t have “proper ventilation,” Read fretted.

Her solution allowed wee ones to bask in the smoggy urban sunshine – while allowing “sufficient room or space for playing with toys.” Plenty of space for bedding, too, in case Junior dozed off. She even threw in “suitable curtains” that could be rolled up or down to prevent “draft.”

Alas, despite its “rigid” construction, it appears the cage only really caught on in a few cases – including London where, in 1937, something called the Chelsea Baby Club distributed them to its members, reports The Atlantic.

Now, I can’t say whether any tots were ever harmed in one of these contraptions – or the innocent victims of pigeon droppings. But it’s definitely received its share of heckling on the blogosphere – triggered, it seems, by a black-and-white photo that appeared in a 2009 London photo exhibit, featuring a blond rugrat gripping from inside his cage, a look of consternation furrowing his baby brow. It also joined Time’s 2010 roundup of “The 50 Worst Inventions,” which dubbed it a “Creepy wire contraption” and declared, “Risky? Maybe, but so convenient. How sweet; how sick.”

Speaking of which, for a little modern-day grin on the subject, BabyCage.net covers all your “infant confinement needs” – from a traveling carrier for your infant to ruggedly designer Teenager Cage. My, how the baby cage has evolved!