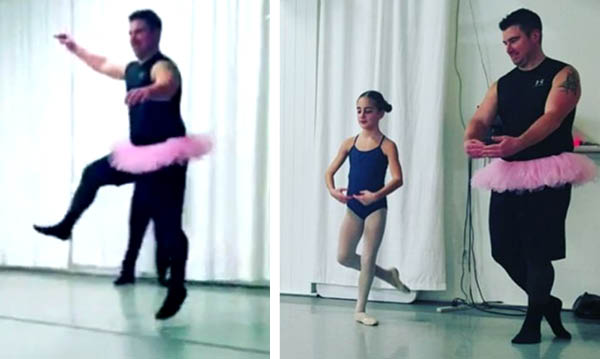 What if, when you were a child, your dad donned a tutu and danced his way through your ballet class? It would be quite the memory for you, right?

Well, recently some dads in Philadelphia did just that – and their fantastic videos went viral after the folks at the Philadelphia Dance Center posted two of these videos from their Valentine’s Day father-daughter ballet class on their Facebook page, Babble reports.

Each clip is only about 30 seconds long, but together, they’ve amassed millions of views. For their part, the men approached ballet with gusto. They donned tutus while leaping across the floor to “The Waltz of Flowers” from The Nutcracker, right alongside their girls.

Check the videos out for yourself.

The videos also struck up a conversation about gender roles and parenting, and it was really heartening to see dads doing something that is traditionally considered girly. It broke the mold while putting a smile on people’s faces.

A few even recalled wishing their own dads had stepped up to enjoy the “girly” things liked with them.

For instance, commenter Chris Mitchell shared her appreciation for her mom who always showed up to help and see her figure skate, but after seeing these ballet dads, she wishes her dad would have tried some twirls on the ice with her.

“This is simply amazing! I just want to say a huge think you to the dads in this video that took the time to want to be your kids and share the love they have for dance. I sometimes think of what it would have been like for my dad to come be there for me as I figure skated, but he was never there. When I see videos such as this, it makes my heart melt and brings a great joy to my life,” Mitchell wrote on Facebook.

Commenter Jamie Pettyjohn also reflected on how incredibly limiting it is when dads avoid activities that are traditionally considered feminine.

“At least these fathers are involved in their children’s interest,” she wrote. “Sometimes it’s hard on social stigmas for fathers to dance or play dolls or play dress up with their daughters, but it means the world to the daughters. I am thankful my single father swallowed his manly pride and played dolls with me when I was younger. It’s not embarrassing to interact with your children.”

For me, watching these dads also happened to strike a chord.

There was time when I was very little and my mom was the sole wage earner in our household. My dad didn’t have a job so she worked long hours to compensate. Back then it was just my dad and I a lot of the time, and to say he made the most of it would be an understatement.

My dad would bring cookies to my school and then spend the day making copies as my teacher’s assistant. He would attend Girl Scout meetings, take me to swim lessons and karate classes after school, and on the weekends, he would help me pull my hair up into a tight knot for ballet.

At dance recitals, he was the one who sprayed glitter on me and made sure the wings on my butterfly costume weren’t lopsided.

It never appeared as if my dad cared much that he was usually the only guy in a gaggle of dance moms, and that may have been one of the most important things in the world he could have done for me – because looking back, I understand that my dad took care of me and spent time with me without condition.

I don’t think I really thought of him as a boy doing girly things. I saw this as my dad having fun with me, and maybe partly because of that, I’ve always struggled with this social notion that certain things are either for boys or for girls and it’s somehow weird/wrong when that manufactured equilibrium is challenged.

And if you ask me, I’m glad that’s something I take issue with – because opportunities don’t seem too far off and goals don’t seem impossible to me on the basis of my gender.

In the words of commenter Kasey Endsley: