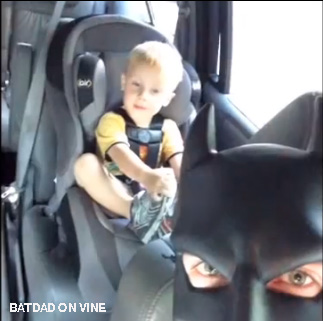 October is right around the corner, and while most people will start getting into the costume spirit soon, one Georgia dad has been sporting his Batman getup for a while now – and he's taking to the Internet to share his parenting tips.

By day, 29-year-old Blake Wilson is a father of four living in Atlanta with his wife, Jen. But by night, he goes by the alias "BatDad," fighting household crimes and dealing with normal everyday parenting woes. He records his adventures using Vine, a popular six-second video sharing phone app (check out some highlights on BuzzFeed).

The videos feature him wearing a plastic Batman mask, speaking to his kids and wife using a raspy Dark Knight voice.

In an interview with BuzzFeed.com, Wilson said he came across the mask in the toy aisle while shopping for a child's birthday party gift. After playing around with it in the store, he bought it.

"I made that first Vine about driving a minivan with the mask on, and we just cracked up. It was so fun I just kept making them," Wilson told BuzzFeed.

He posts a new BatDad video almost every day and, with over 330,000 followers on Vine quickly climbing – and an appearance on the Today Show today (the morning of Wednesday, Sept. 25) – it's clear people love his hilariously simple videos.

"Hey, most kids these days have the 'Invisible Man' as a father," Shanekarma chimed in on the same article. "I reckon Batman would be an improvement."

His videos sometimes feature his wife, who is seen both laughing at BatDad's shenanigans and unpleased or startled.

"BatDad's kids are going to grow up to be very happy, well-adjusted adults having such a fun and attentive daddy," Tmurphy760 commented on Huff Po. "The wife, on the other hand is well on her way towards anxiety disorders."

This user wasn't the only one who thought problems were afoot in this family. Indeed, not everyone thinks BatDad's videos or his actions are lighthearted and harmless.

"It seems to me that BatDad is hiding behind a mask in order to be able to be a 'real' father and teach his kids manners, right from wrong, etc." Jacmed noted on Huff Po. "He's not BatDad; he's BattyDad and definitely needs some psychiatric treatment."

Check out his videos and decide for yourself! His vine username is BatDad, and you can find him on twitter @BatDadVine.

Looking for the best place to score a paczki for Fat Tuesday? These bakeries in metro Detroit and Ann Arbor have you covered.
Read more
Travel