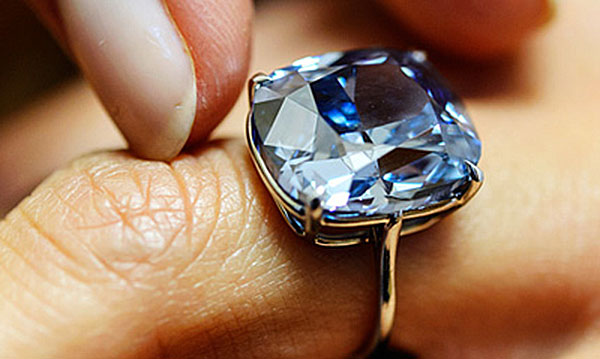 Property tycoon Joseph Lau spent $48.5 million on a 12.03-carat blue diamond at a Sotheby’s jewelry auction in Geneva. The ring was a gift for his 7-year-old daughter.

The “Blue Moon diamond,” as in, “once in a blue moon,” was found in a South African mine last year and deemed the best color quality for blue diamonds by the Gemological Institute of America, Refinery 29 reports. Hence, the steep price tag. To put the stone’s value into perspective, each carat breaks down to approximately $4 million. Each carat is “worth almost 1,000 times the average engagement ring in the U.S.”

Evidently no price is too hefty for daddy’s little girl.

Lau dubbed the stone “The Blue Moon of Josephine,” after his youngest daughter. The purchase comes one day after Lau spent $28.5 million on a pink diamond for her that he renamed “Sweet Josephine.” At another Sotheby’s Geneva auction in 2009, he snapped up another blue diamond for $9.5 million he called the “Star of Josephine,” the New York Post notes.

Many wonder just how wise these young ladies will grow up to be since they began their lives with everything.

“I guess if I had that much money I’d buy blood diamonds for my kid,” claudia_nr comments on Refinery29. “Probably not, I’d actually probably use it to help the starving kids in my country.”

The standard Lau has set for humanity in the eyes of his daughters is grossly unrealistic.

“I could be very wrong, but daddy has already warped her value system as to what really matters in humanity,” Joe Mac Pherson also comments.

Good luck to the gentleman who will one day try to court that young lady and “put a ring on it.” He’s got one heck of a price tag to trump, not to mention a psyche to persuade that money isn’t everything.

What do you think? Precious gesture, or is Lau setting his daughters up for a lifetime of disappointment?