Boy, 7, Locked in Coffin as Punishment 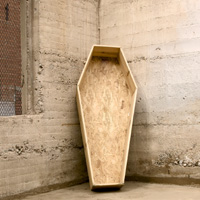 It's no Halloween prank. A mom, along with her boyfriend, is facing charges after her 7-year-old was allegedly locked in a makeshift wooden coffin – with a crude "R.I.P" stenciled in white on top – in the basement of their Scranton home.

The boy recently testified against the couple. He said his caretakers put him in the box as punishment – even several times prior to the reported incident, according to local news station WNEP 16, and sometimes securing the lid down with duct tape. Back in late September, the child broke free and neighbors heard his cries – and apparently discovered the child barefoot, hungry and wearing a diaper.

Reports have painted an equally bizarre court scene: The boy, in a striped shirt and "his head barely poking above the witness stand," accusing his mom, 26-year-old Lori Gardner, of making him wear the diaper "to embarrass him," according to the The Times-Tribune of Scranton's coverage of the scene – apparently as punishment for letting his 1-year-old brother out of his playpen without permission.

Their defense attorney, Barry Dyller, has countered that the accusations are simply untrue. "It's an utter nonsense case," he told WNEP. "The worst possible testimony against Ms. Gardner is that she punished her son and made him sit on the top step of the basement steps."

Allegedly after she left, her boyfriend, Brian Sleboda, 31, put the boy in the box. "He was teasing me about ghosts in the basement," the young witness said, according to The Times-Tribune. "He told me that the ghosts would come."

If accounts of that basement – which investigators dubbed a "dungeon" – are any indication, it's certainly bone chilling. But while the skeleton, vampire and devil décor may have rattled the second-grader (beyond being stuck a pitch-black box, that is), what disturbed officials was the stench of mold, charred beams, exposed wires and "toilet swarming with flies," as described in court by a cop named Melissa Forsette in The Times-Tribune story.

As for the boy, he's been strikingly clear. "Very smart little boy, very well spoken, very cooperative with whoever talks to him," as assistant district attorney Mary Ann Grippo was quoted by WNEP. On his way out of the courtroom, The Times-Tribune reported, he high-fived a sheriff's deputy.

The kid and his baby brother are now reportedly in foster care, and the couple is being held at the area county prison at $60,000 each in bail.