A 9-year-old boy in Tampa, Florida got in big trouble for sending his crush a love note. Did the school overreact? 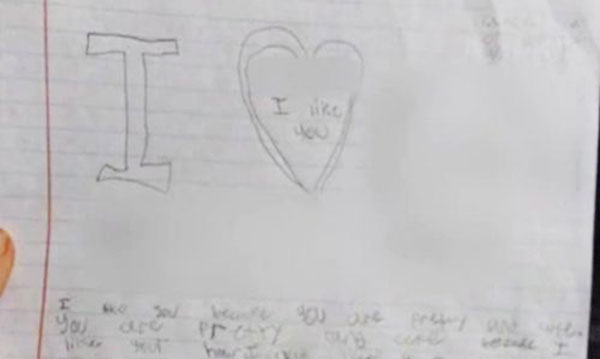 Did you ever get a love note when you were in school? Perhaps you passed one to a classmate – confessing your affection for him or her. Did you ever get in trouble with administration for it?

If you were a kid today, though, you could get in some serious trouble. These days, passing a love note could mean getting threatened with a sexual harassment charge – even if you’re a 9-year-old boy. That’s what happened at a Tampa, Florida school.

The student, who attends the Hillsborough school district, used the written word to express his feelings for a female classmate.

“Sadly, things took a turn for the uncomfortable when the fourth-grade boy was teased by his classmates for writing the note, with their even implying that he wanted to see his crush naked,” The Stir reports.

The little girl wasn’t too thrilled with receiving the note in the first place. It isn’t the first one she received from the young boy, but when other students started all that naked talk, well, the girl got even more upset.

“That’s when the principal proceeded to tell me that it wasn’t appropriate that he was writing the note and that if he writes another note, they are going to file sexual harassment charges on my 9-year-old,” the boy’s mom tells ABC Action News.

“Hillsborough school district said they did not threaten to involve authorities. But they did say the boy wrote more than one note and that the notes were unwanted, so that borders on harassment,” ABC Action News reports.

Did the little boy put his hands on this girl? It doesn’t seem like it. Was she likely embarrassed by his notes – and what other classmates were saying? Sure.

Mom should sit her son down, though, and discuss borders. Maybe tell him to cool it with the love notes. But I’m not even sure this kid knows what sexual harassment really is. Should we really shame him for expressing his feelings in a love note?

What do you think? Was the school overreacting or was this handled well? Tell us in the comments section below.

How busy moms can really — and should — make time for themselves.
Read more
Attractions

Planning your family fun for the month? Metro Parent has you covered with the best upcoming events in Macomb, Oakland, Wayne and Washtenaw counties.
Read more
Things to Do