When boys couldn't wear shorts on a hot day but girls could wear skirts, these students found a simple solution. Do you agree with their protest? 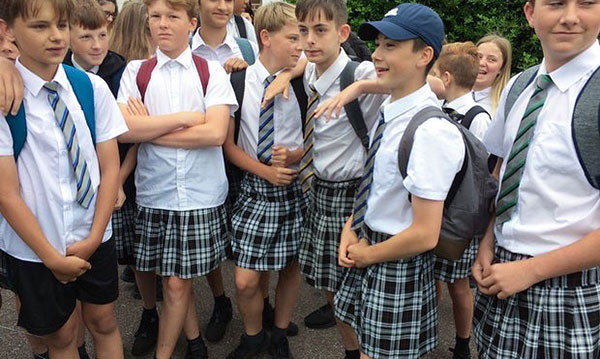 Should a student’s gender inform their dress code? Boys at Isca Academy in the U.K. don’t think so, and they showed some leg to prove it.

About 30 male students at the school showed up in skirts one morning in June in protest of a school policy that prohibited them from wearing shorts on a hot day, the Guardian reports.

With a heat wave bringing unusually high temperatures to the area, the boys had asked their teachers if they could wear shorts instead of pants even though their school uniform policy didn’t allow it. The answer was “no,” but the students argued it wasn’t fair that their female classmates were allowed to wear skirts, according to the article.

So a teacher apparently joked that the boys could wear skirts instead – and the students took it to heart. When they did, their bold decision quickly went viral, with coverage everywhere from TIME Magazine to The Weather Channel.

Beyond a little unexpected media attention, none of the boys faced any consequences at school for ditching the dress code. And the result of their impromptu protest? It might mean changes are coming to school policy. Head teacher Aimee Mitchell told the Guardian that she’s willing to consider the issue.

“We recognise that the last few days have been exceptionally hot and we are doing our utmost to enable both students and staff to remain as comfortable as possible,” she said in the article. “Shorts are not currently part of our uniform for boys, and I would not want to make any changes without consulting both students and their families. However, with hotter weather becoming more normal, I would be happy to consider a change for the future.”

And why shouldn’t the school revise its dress code to be fairer? As one mom at the U.K. school told the publication, “Children also don’t like injustice.”

The parent continued, “The boys see the female teachers in sandals and nice cool skirts and tops while they are wearing long trousers and shoes and the older boys have to wear blazers. They just think it’s unfair that they can’t wear shorts in this heat.”

Excessive heat or not, it seems reasonable that shorts are an option for boys (and girls, for that matter) if it makes the students feel more comfortable.

School dress codes have caused problems in the past, of course, from poorly worded policy letters to students being called out for “inappropriate” outfits. It’s good that this school is being responsive to the problem male students pointed out and we applaud the boys for taking a stand.

Our only advice? They’d better watch their hemlines, or that might be the next overreaching rule they’ll need to protest.

What do you think of the students’ decision to wear skirts to school? Do you agree with their protest? Tell us in the comments!