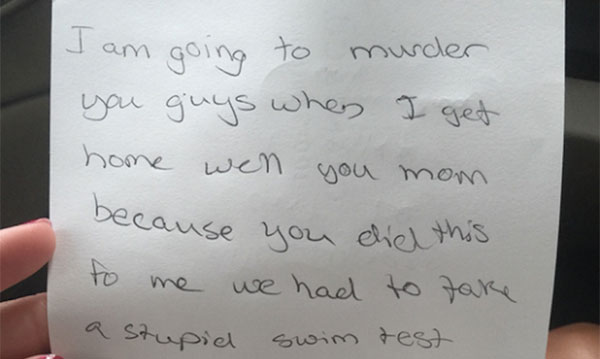 Summer camp can be a great experience for kids and sometimes they love it so much they don’t want to go home. This, however, wasn’t the case for 12-year-old Bailee. During her weeklong stay at a camp in Birmingham, Alabama, she sent back a letter to her mother, Carrie, documenting exactly how unhappy she was about her camp experience.

Bailee starts off the letter saying, “I’m going to murder you guys when I get home … well you mom because you did this to me.” Not exactly how the usual “thank you for sending me to camp” note would start, right?

Instead of telling her mother about friends she made or the fun things she was learning, Bailee writes, “We had to take a stupid swimming test.”

Carrie’s cousin Melissa Christo posted a photo of the note on Reddit saying, “My cousin dropped her daughter off at summer camp a few days ago. This is the first letter she sent home.”

This note is slightly terrifying but totally hilarious. Clearly, Bailee has better ideas for her summer vacation.

“I know you said I would love it but I will never, it is terrible,” Bailee emphasizes.

To some parents a letter like this one would be alarming, but not for Panama City, Florida mom, Carrie. She tells Yahoo Parenting it is not out of character for Bailee to express herself like that.

“Although it was the first time she threatened to murder me, us. But it didn’t bother me at all that she was miserable. Misery builds character. My reaction was actually that I wish she could stay at the camp for a month,” Carrie tells Yahoo Parenting.

Bailee finishes the note off with “Luv ya and please ask me next time so you don’t waste 700 dollars on me.”

Well, I do think $700 seems a bit expensive for a week of something the poor girl didn’t want to do. However, it’s understandable to send tweens away to get them out of their comfort zone and change the scenery.

“We sent her with the hope that she would learn she is more independent than she thinks,” Carrie tells Yahoo Parenting. “We also wanted her to make new friends apart from school.”

Yes, summer camp can be great for kids to have a different experience, but it may be more pleasurable for them if they want to go.

What do you think of this note? How would you feel if you received it from your child? Tell us in the comments below.