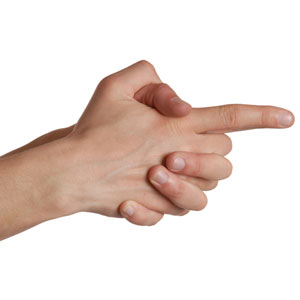 Cops and robbers is – or, should I say, was – a staple of the American recess experience. But times have changed. And, especially in light of recent violent events, so has the way we look at how children play.

In the wake of the massacre at Sandy Hook Elementary School in Newtown, Conn., discussions about gun laws, school safety and mental health have been all over the news. Now, the game of cops and robbers has entered the arena of these hot-button issues: A 6-year-old Trappe, Md. student was suspended for making imaginary gun gestures at another student during recess.

It was a typical day on the playground, said the suspended child’s mother, Teri Bildstein, in an article published in The Star Democrat. Two children – one of them being her son – were rambunctiously playing cops and robbers. And, as the game goes, the students were pointing their figures, creating hand gestures that mimic guns, in attempt to “capture” each other. But another student, who had been watching on, reported the behavior to a staff member, who informed White Marsh Elementary School principal Marcia Sprankle.

Following the incident, Sprankle suspended the first grader involved in the schoolyard game, causing outrage from his parents – and many others.

“This is easily the most ridiculous thing I have ever heard of, “the student’s dad, Army Staff Sgt. Stephen Grafton, told The Star Democrat “This, a completely harmless act of horseplay at recess, was by no means an offense that warranted a suspension.”

Others agree with the angry father. “If you thought ‘zero tolerance’ was bad before, you ain’t seen nothing yet,” blogger Doug Johnson writes on Whizbang. “Maryland is fighting (and winning) a war against pre-teen boys and their imaginations.”

Some, however, question how scary this type of “horseplay” can really be. “I wonder about the student who reported (the) two first graders (who) were using their hands to mimic a gun,” EmmyEmEmEm commented on an article published in the New York Daily News. “Did that student feel threatened?”

While Sprankle did not publicly respond about the incident, she did assure the boy’s parents that his suspension would be rescinded and removed from his permanent record, according to The Star Democrat.

But the reality is, this incident isn’t unique. In fact, The Star Democrat adds, the White Marsh suspension occurred after another Maryland student – also 6 years old – from Roscoe R. Nix Elementary School was suspended for pointing his finger at another student and saying “pow.” (That school is in Silver Spring, Md., about 80 miles away.)

“Across the country, there are parents going through this,” Bildstein told The Star Democrat. “Things need to change.”

It’s pretty evident that the line between discipline and downright overreaction is becoming blurred. There’s no doubt that the debate to define the “line” between playfulness and threatening behavior will continue to pop up in schools, neighborhoods – even in your own home.

Get the kids inspired by Detroit's vast history of innovation in this culturally rich city of Dearborn.
Read more
Attractions