Dad Bod: A Body Image Buzzword for the Guys

Some women (and men) are cheering for this average-dude physique. We're all for embracing your body. But isn't it still just sort of objectification? 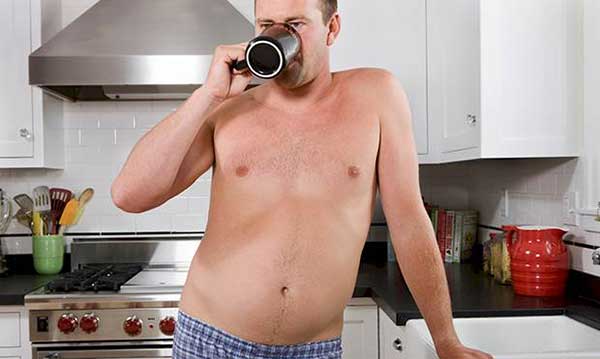 When “dad bod” first popped up in my feed a few weeks ago, I can’t fib: I grinned. The article showed a bare-chested dude casually walking down the beach in swim trunks. Definitely not Mr. Six Pack. But not exactly Mr. Beer Gut. Just – y’know – a guy. Your friend, hubby or, as the catchphrase that’s stuck sums it up: Dad.

Dad bod’s trademark, as The Guardian puts it, is “soft bellies and phantom abs.” Tracing the trail back to a March 30 article by Mackenzie Pearson that seems to have coined the term: “The dad bod says, ‘I go to the gym occasionally, but I also drink heavily on the weekends and enjoy eating eight slices of pizza at a time.’ It’s not an overweight guy, but it isn’t one with washboard abs, either.” Adjectives rejoicing the “dad bod” span from “natural” to “cuddly.”

To clarify: We’re definitely not just talking about dads here. Pearson herself – who’s def a fan of the physique – is a young-adult student at Clemson University in South Carolina. Yet whether put in the college context or beyond, it paints a picture – and gets a response.

Some of those, like my initial reaction, erred on the light side. I instantly thought of my own dad, a solid middle-class guy who’s dedicated to his daily sit-ups and bench-presses – yet enjoys his brews, too (“Everything in moderation, Kimberly,” as he’s been known to say). Hey, the guy looks good! But the point is, I got a great mental image. Just as quickly, though, I got a gut feeling this label wasn’t going to go down Budweiser-smooth for everyone.

A Huff Po UK headline captures one view: “I Refuse to Celebrate ‘Dad Bod,’ Until We Appreciate ‘Mum Bod’ Too.” That means the stretch marks, cellulite and “a little tummy,” writer Brogan Driscoll says. She points to the fresh-from-the-giving-birth, second-time mom Kate Middleton – who strutted out of the hospital “looking immaculate,” even sporting heels. “No one was coo-ing over Prince William’s appearance” (I’ll put it out there: His blue sweater was pretty sharp).

But she has a point. Unfortunately, women get a bad rap for sniping at the smallest hints of flab. What about mom badges of pride? As a New York Times article notes, when it comes to “gains in weight, waistline and belly size,” moms and dads are basically neck-in-neck, according to data it analyzed from the Centers for Disease Control and Prevention.

And dads do seem to fare a bit better on this body-image front. Just take the blog Dads Are the Original Hipster (get ready for some serious beards, beers and plenty of old-school dad bod – oh, and word of caution, there are a few swears peppered in there). For better or worse, it seems dads somehow snap a little more easily into the “badass” category.

But still: Labels are what we make them. Society and social media tend to slurp them up. Yet truth is, calling out a man on his “dad bod” can be just as objectifying. (In Pearson’s original post, in her list of dad-bod defenses, she declares, “We like being the pretty one” – now that made me grimace.)

So hey. Whether your body leans more Seth Rogan or Jamie Dornan: Dads, we love you. Rock whatever dad bod you got. (And moms, that goes for you too!)