Did a 'Feminist' Mom Really Make Vagina Cookies for Kids? 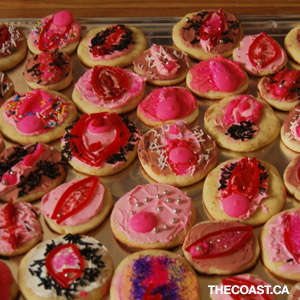 Sex ed can be one of our school system's touchier topics. So we suppose it's little shock the anonymous story of a mom named "Autumn" and her controversial cookies has had the internet's, well, panties in a bunch.

It all started earlier this week, when a Reddit user named "jpstudly" posted "a friend's story" on the social networking site. It goes like this: A public school second-grade teacher got an offer from a volunteer parent to bring in a reward snack for the class. Teacher says, "Great!" Mom then shows up, all smiles, and announces, "I decided you can use these to teach the kids about the woman's vagina today," according to the Reddit post.

The teacher lifted up the foil to behold – you guessed it – vagina cookies. From there, the story goes, the teacher politely told the mom the treats were not appropriate and she couldn't serve them. Then? "Cue angry radical feminist," the teacher writes. "Autumn" – and we quote – "bursts with the fury of a thousand angry Andrea Dworkins," berating the teacher and yelling the word "vagina" some "987,000 times" in front of the small fries.

After the furious mom stormed out, the teacher, thinking quickly, scraped off the anatomical frosting and served up the snacks as plain sugar cookies.

As of this writing, the story's validity – or even the state in which it happened – hasn't been confirmed. Popular myth-debunking website Snopes has deemed it's "entirely possible that the tale is either exaggerated or wholly fabricated," due largely to the vagueness of the specs, filed under Reddit's "TIFU" (Today, I F*cked Up") thread.

(We might add, the colorful writing had us raising our eyebrows a bit: This teacher chose to emphasize the details of the cookies this way: "Not just any old vagina, but ALL KINDS OF VAGINAS. There were small, puffy, white, brown, shaved, bald, and even a fire crotch with beef curtains." Ex-squeeze me?)

Regardless: Since it was posted, it's gone viral. And while whether this femi-mama actually exists remains unverified, there's been loud outcry. People, it seems, are not excited about vagina cookie education entering the curriculum.

"You have got to be kidding! That woman was ridiculous and absolutely insane," JenaLee Coburn, a reader of elitedaily.com, comments. "Cookies like that are something you find at a sex toy shop for sale, not in a class room of children. I would be horrified if someone took it upon themselves to 'teach' my child what to do with a vagina or penis and how to please it at 7, 8, and 9. That is disgusting!"

The commenter is referring to the angry email the teacher says she got later that night from the mom (complete with screenshots linked to the Reddit post) that read, in part, "We as women should stand together and inform people about the vagina and how to please it." The email also declared, "I hope you end up with an abusive husband that beats on you every night." Whoa, really?

But the story, complete with details about how worried parents called and emailed the teacher later that day wondering how their kids learned the word "vagina" – has others crying foul.

"Totally fake. Written by a guy named jpstudly … a 23-year-old military dude with a bug up his (butt) about feminism, trying to make feminists look bad," speculates Aleks, a Mommyish.com reader. "Had this actually happened, the real media would've had enraged parents talking about it, and criminal charges would've been made. Spreading this only serves to try to make real feminists look crazy."

But, considering for even a split second there's some truth to all this, The Blog writer Erica Ford notes on HuffPost Parents: We should be thinking about this mom's poor kid, who supposedly was plucked from the class.

"It's only a matter of time before she brings fallopian tube swizzle straws to a class party or serves deviled egg ovary sandwiches," Ford writes. "My heart broke for this child who would forever be 'the kid whose mom screamed about vaginas in class.'"

"This story isn't about feminine pride," she adds. "It's about a parent who's knitting with one needle."