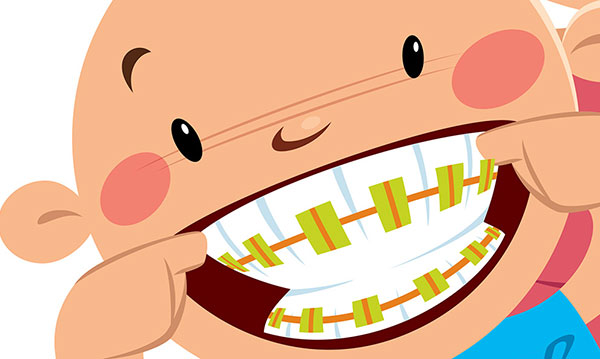 It seems that braces have gone from “gag” to “fab,” thinking of them as a fashion statement. But some kids who can’t afford actual braces have decided to make their own cheap versions at home to get the look – or to attempt straightening their teeth.

The do-it-yourself-braces trend has flourished on social media sites like YouTube. On YouTube, many of the kids demonstrating the DIY braces trend feel self conscious about the gaps of their teeth and have found that using elastic rubber bands works similar to metal braces.

Others who are looking to make the fashion statement even include the butterfly backs to earrings in the elastic bands, like in this video by The Randomness247 on YouTube. By using the butterfly backing, they place the flat part on the front of the tooth and slide the elastic band between the wings in the front. This gives a look similar to the metal brackets of traditional braces. By making a single loop full of the earring backs, the tweens are slipping these on and off like bracelets. “I don’t recommend that you put it on your bottom row. It can hurt and you can barely talk,” says TheRandomness247.

One of the most famous DIY videos with 740,000-plus views on YouTube is by Shalom DeSota. In the video, you see her demonstrating her “cheap” and “easy” braces. She breaks the elastic band, ties it around her two front teeth and tightens it to push the teeth together – a technique she claims closed her gap. “It’s gonna hurt, especially the first few days. It’s gonna hurt really bad. You may even wanna give up, but don’t, OK, ’cause it’s totally worth it in the end,” she says in her tutorial.

But this trend comes with its risks. Little do these kids know, the cheap “miracle” could be risking damage like bone loss, root damage and even tooth loss, according to Juan Rendon, DDS, MSD, interviewed by Refinery29.

“It seems very attractive that you could possibly move your own teeth, but when you move a tooth, the color of the tooth might change because you are damaging the blood supply,” Rendon tells Refinery29. “You’re also going to have problems with your gums. When the gums are subject to pressure, the blood supply is cut (off), which changes the shape of the gums and can cause severe inflammation and infection.”

Currently, the traditional metal braces cost on average $4,937 without dental insurance, according to CostHelper.com. Despite the extreme cost of braces, Rendon tells Refinery29 that folks using this DIY braces method will likely spend more trying to reverse the damages in the long run.

The desire for children to be like their friends has changed dramatically. In my time, we despised braces and wanted sneakers that lit up when you ran just because all the cool kids had them. I had braces for five years. Never once was I cool for having them or was I envied for being fashionable. These alternative braces can be dangerous and should not play a role in a child’s self esteem.

Let us know what you think of this DIY braces trend! Comment below with your thoughts.

Lace up your skates and enjoy an evening of old-school fun with your family at one near you.
Read more
Things to Do

Get the kids inspired by Detroit's vast history of innovation in this culturally rich city of Dearborn.
Read more
Travel