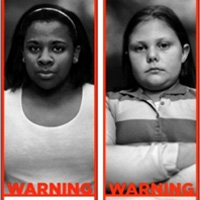 Two empty folding chairs are bathed in a stark spotlight. A large woman and a boy, also overweight, sit down one at a time, each making distinct creak noises.

In the harsh black-and-white footage, the sweet-faced child, identified as "Bobby," slowly looks up at the lady and says, "Mom, why am I fat?" The camera lingers on his sad face. The woman's head drops.

Then, the screen flashes this message: "75% of Georgia parents with overweight kids don't recognize the problem."

It's part of the state's new anti-childhood obesity campaign, Strong4Life. The series of short ads – five in all – each features an obese child. Including Tamika, a young girl with type 2 diabetes, according to her mom in a voiceover. And Tina, who discloses, "I don't like going to school because all the other kids pick on me. It hurts my feelings." Ditto Jaden, who's taken to playing video games solo.

Each one wraps with this blunt warning: "Stop sugarcoating it, Georgia."

In a state with the country's second-highest childhood obesity rate, hovering around 40 percent, it's a harsh awakening. In fact, that's how it's being pitched in this PSA by Children's Healthcare of Atlanta, one of the state's largest hospitals. As its website puts it: "Ignoring this problem is what got us here. It's time to wake up."

The tough talk is necessary, the hospital's senior VP, Linda Matzigkite, told CBS This Morning: "We need to get their attention, because they're in denial about it," she said of parents. "People ignore flowery ads. There are plenty of them out there. They don't work."

The Strong4Life site also includes facts on childhood obesity, a checklist of questions for parents to approach their healthcare provider with, and nine quick tips for action – from screen time and play to fast food and sleep.

But despite the underlying message, many are concerned about the call to action. "Why is Georgia shaming fat children?" asked a Salon.com headline. "The main thrust of the campaign is still a horribly misguided focus on what a bummer it is to be fat," writes columnist Mary Elizabeth Williams.

The nonprofit Obesity Action Coalition took offense, too. In a letter to CHOA's chairman, it contended: "We absolutely condemn the imagery, content and focus of the campaign" – particularly catch phrases like "Chubby kids may not outlive their parents," "Fat kids become fat adults" and “Big bones didn't make me this way. Big meals did."

In its own survey, OAC added, its members and "the general public" felt likewise, with over 80 percent finding the ads offensive and hurtful toward kids.

While the ads may be cringe-worthy, they're definitely achieving their goal of grabbing eyes and ears.

And at least one of the kids has spoken out in defense of them. A Georgia tween named Chloe stars as Maritza, a girl who looks near tears as she says, "My doctor says I have something called hypertension. I'm really scared." She also appears on a billboard next to the phrase, "Being fat takes the fun out of being a kid."

She told CBS This Morning that she was a little worried about what people would think, but had no regrets.

"I've decided that it's more important to help kids with the same problem that I have," says Chloe, who's already working to eat better and ride her scooter more. "I feel really good about myself. I have lots of self-confidence.

"It's supposed to help (other kids) so they can lose weight and can get healthier."

Whether it will hit other Georgia kids – or, more specifically, their parents – the same way remains to be seen.