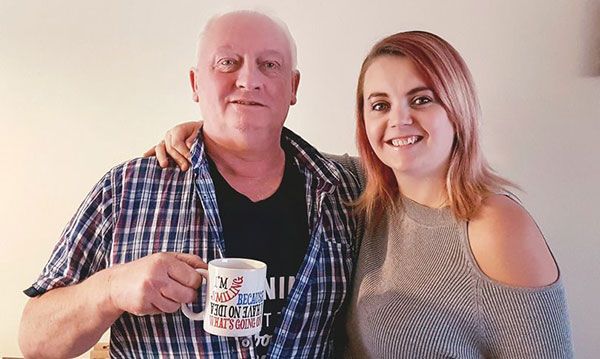 The thought of anyone except your child drinking your breast milk is cringe-worthy, but would you let your dad drink it if it meant he’d live longer? Being selfless is great and all, but some things are plain gross. People often say they’d do anything for their families, but where do you draw the line?

Jill Turner, a 30-year-old mother from Warwickshire, England, started giving her father, Fred Whitelaw, 64, her excess breast milk when she researched ways to help dad, who was first diagnosed with bowel cancer in 2015.

Jill told The Sun her father was reluctant – for obvious reasons – until he realized he had nothing to lose and started drinking her breast milk in his morning coffee.

“When I mentioned its possible links with cancer they thought I was joking, and never did I think that my dad would agree to drink it,” she says in the post.

Jill gave birth to her son, Llewyn, in October 2016 and told Metro, another UK publication, she has been producing milk for both Llewyn and Fred.

“I got myself a double pump and started expressing enough for dad, but I am always conscious that I need to make sure there is enough for Llewyn first,” she says.

Jill doesn’t see the cause for outrage and reportedly says she has used her breast milk to help the health of other family members too, including her husband, to treat his eczema.

“I just want to do anything I can to help and I don’t see the problem in giving my dad something that is natural,” she says.

Fred has been drinking Jill’s milk for only a month and has not seen any obvious improvement, reports say, so no miraculous healing yet. He has a scan scheduled in four weeks and his family is hoping for good news.

Before you start distributing your breast milk to ailing family members, Caroline Geraghty – Cancer Research UK’s senior cancer information nurse – told The Sun she recommends a consultation with a doctor.

How far would you go to help your ailing father? Is this story gross or endearing? Tell us below in the comments.