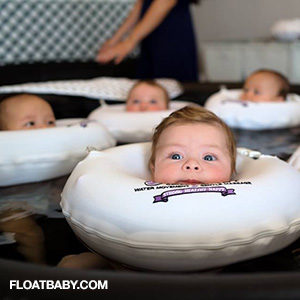 To clear the air: When the Metro Parent creative team first got a load of Float Baby – which is getting buzz as a first-of-its-kind "spa" for babies – we couldn't get over the pix of tiny, chubby-cheeked faces peeping out of doughnut-shaped inflatable devices, their little limbs dangling below in a tub of temp-controlled purified water. Please, before anything else, take a quick gander at these blissed-out squirts, courtesy of Incredible Things.

Squee. Moving along. So yes, Float Baby is a thing. It's a business, more specifically, located in Houston and created by Kristi Ison, a mom of two and certified infant massage instructor. Its staple services include "Peace Baby," a three-week gentle infant massage class, and "Float Baby," a sort of water therapy for tykes ages 2 weeks to 6 months – who experience "the sensation and freedom of movement in the near weightless environment" for about 20-25 minutes. That white tube thingy safely supports their tender noggins, and the sesh is complete with swim diaper and warm, antimicrobial towels made in Turkey.

All of which, understandably, has some – like Incredible Things writer Brittany High – asking, "Exsqueeze me, but aren't parents the ones who need the massage?"

She makes good points. Babies "eat, sleep, cry, look cute as hell and poop their pants. And that is basically IT." So why recreate the womb from which they were so jarringly plucked? (Hmm … maybe these traumatized tadpoles do need a spa?)

Well, according to Ison's site, Baby Float benefits range from building up your babe's muscular and skeletal strength to respiratory and cardiovascular perks – even giving cognitive development a boost. Kids with special needs like Down syndrome and neuromuscular disorders could benefit as well. And, as her site also notes, "Babies are no strangers to water."

"The newborns especially like it; we see them float and then have a little cat nap," Ison told Today.com in May, noting she was inspired by a similar concept in the UK. Older babies "really like to kick around and splash and socialize."

The biz, which reportedly opened in February, saw about 130 babies in those first four months alone, Today.com noted. And, with plans on the horizon for a slick, detergent-free swim diaper/towel purifying system – not to mention coffee bar, lactation cookies and "fresh new blends of our organic oils" – this Texas pioneer is clearly making a splash.

An hour-long session runs about $65 and also includes infant massage instruction for parents. Learn more about the Float Baby program on its website.