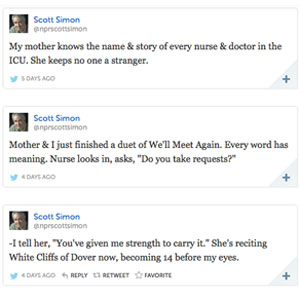 The experience of losing a parent is completely unexplainable. It's hard for an outsider to understand the grief that goes along with the loss. Aside from family, the most comfort a person grieving the loss of a parent can find is usually in someone who went through it, too.

Scott Simon, a reporter for NPR, recently made the personal experience of his 84-year-old mom's death very public. Simon, who generally tweets news updates and posts about his life and family, recently posted his final moments with his mother before she passed to Twitter – including a number of intimate moments and recollections. In fact, he tweeted throughout her final hospitalization, which lasted eight days, until her death on July 29. The posts reached Simon's nearly 1.3 million followers.

People's reactions have varied wildly. Some say these tweets take things too far, while others feel the posts were appropriate and even comforting.

This topic really hits home with me. I lost my own father six years ago. I was 16 years old.

I remember that day so clearly. It was my birthday. We celebrated with a family lunch. Later that day I went to soccer practice, and my mom and I went to the team picnic. While we were there, we got a call saying my father was not feeling well, and my mom rushed home. Dad was hurried to the hospital. His life ended so suddenly, and I had millions of thoughts and emotions filling my head. What would happen now? Who could understand the pain I was going through? Were these emotions normal?

My first thought after hearing Simon had tweeted his final moments with his mother was, how exactly did he do this?

According to CNN, Simon posted a happy picture of his family out to dinner on July 19 and mentioned his mother. On July 26, his tweets posted from the hospital consisted of "observations of his mother's behaviors and his attempts at negotiating the tight-knit hospital community." And by Sunday, July 28, "The only updates are tender descriptions of their interactions. The lens focuses on just the two of them." Finally, on Monday, "We are given access to the final goodbye between a mother and her son."

Simon's tweets were from the heart.

"If we only truly realized what little time we have … "

"You wake up and realize: you weren't dreaming. It happened. Cry like you couldn't last night."

Some were critical of Simon's tweets. "Everyone suffers loss. Everyone. That's no excuse for begging for attention and acting pathetic," commented MIHAIBRESTYAN on a New York Magazine article.

Others were harsh after Simon tweeted this: "I love holding my mother's hand. Haven't held it like this since I was 9. Why did I stop? I thought it unmanly? What crap."

BARTLEBY commented, "With the tweet when he said he was holding his mother's hand, I imagined him by his mother's bedside doing just that … and typing in his tweet with his other hand. It's his way of dealing, but in my experience, sometimes you're more in the moment if you just put your mobile devices away."

Simon has received support from the public, too.

"The loss of a parent, in particular a mother, can a very lonely and isolating experience," 11genealogist11 comments on CNN, "Anything that can help people feel less alone at a time like that is a gift. Thanks, Mr. Simon."

For his part, Simon has remained vocal. In an NPR interview with Simon, he said, "I don't think it's any less sacred because it was shared with a lot of people – and it must be said, you know, there was a lot of stuff that I didn't share."

This rang true with commenter whatdoweknow on the CNN article.

"My mom passed on June 30 … you are in-and-out of their room for days … that would give you lots of time to think and to tweet," the user wrote. "I don't tweet, but if I did, I would have had lots of time to do so and to reach out to people so that I did not feel alone."

This got me thinking: Would I have tweeted the final moments of my dad's life – before it was cut short by a heart attack – and the moments following his death? Quite possibly, because in that moment, there are so many emotions that come flooding in that you need a way to release them, and if my story will help someone else deal with loss, then I see it as a positive thing. Now don't get me wrong – certainly I would not share everything. Some things should be kept personal.

Simon's tweets documenting his final moments with his mother seem like a good way to deal with all of the emotions that accompany losing a parent. These posts also provide a good resource for those experiencing the loss – they're a place to turn for comfort and to see you're not alone in your thoughts and feelings.

Of course, with something this personal, everyone might handle the situation differently – and each person has her own comfort level with sharing something like this. Would you tweet during your parent's final moments?