Is This Disney Halloween Costume Offensive?

People have taken to social media to bash a costume from the new Disney movie 'Moana,' calling it brownface and cultural appropriation. 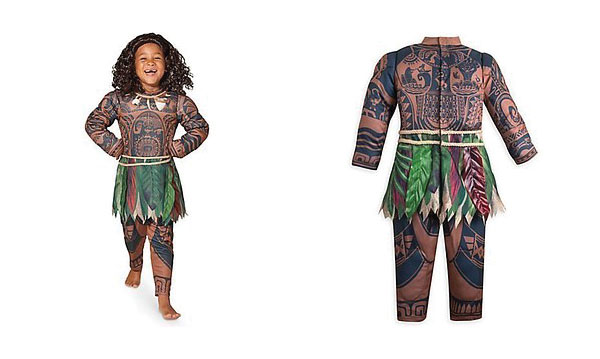 Update: As of Sept. 22, 2016, Disney pulled this costume from its stores, according to E! News. According to the report, Disney released a statement to several media outlets on the costume, which reads, “The team behind Moana has taken great care to respect the cultures of the Pacific Islands that inspired the film, and we regret that the Maui costume has offended some. We sincerely apologize and are pulling the costume from our website and stores.”

There’s a brand new Disney animated flick hitting theaters around Thanksgiving of 2016. The movie, Moana, centers on the demigod Maui and Polynesian culture.

So naturally, with Halloween right around the corner, there is a Maui costume on the market. And that’s got some people talking.

According to articles by BuzzFeed and Gizmodo, people are already buzzing on social media about the offensiveness of the costume, which is available through the Disney Store. The costume consists of a brown-skinned body suit covered in tattoos and wearing a grass skirt. The main complaints about said costume are that it’s an example of brownface and cultural appropriation.

Samoa Planet posed this question on the costume to Twitter followers:

Is this cultural appropriation at its most offensive worst? #BrownFace. OR just a fun celebration of Pasifika? https://t.co/wVEtA0FMpX

The movie has faced some criticism already, too. Earlier this summer, The Washington Post reported some “prominent Polynesians” have “voiced discontent” with the character Maui and how Disney depicts him, both physically and as a comical character.

There’s a lot of complexity when it comes to this costume and overall topic. In a way, is it nice Disney is highlighting diverse cultures and people in its movies? Yes. And is the costume merely a product of that? Shouldn’t kids be able to dress up and emulate a character they like? One could argue those points, too.

But, there’s more to the costume than that – especially for those of other cultures. Other social media users point to the heart of the issue, with one Twitter user TheBlackSheep.com highlighted in the BuzzFeed piece saying, “As a Poly, I support our folk involved in #MOANA. But this? NO. Our brown skin/ink’s NOT a costume.” And another user, jess banks, noted, “As excited as I am for #Moana, and as cool as Maui will be, other people’s skins are not costumes.”

And there you have it.

A few points come to mind: there is an incredibly long, awful history of white actors using blackface makeup in the entertainment world and movies to impersonate people of color in racist, insulting and insensitive ways.

Cultural appropriation, another reason this costume is being deemed offensive for many, also is insulting to those of other cultures. Here’s why: as an About News article explains, “(Cultural appropriation) has little to do with one’s exposure to and familiarity with different cultures. Instead, cultural appropriation typically involves members of a dominant group exploiting the culture of less privileged groups – often with little understanding of the latter’s history, experience and traditions.”

Don’t we owe it to those of other ethnicities to listen when they tell society at large something is offensive to them and not write that off? We should want to be open to learning about topics and issues we aren’t innately knowledgable of – and even more so if somebody of a different race is telling us something is hurtful to them. There is no point to living life blissfully unaware of how these seemingly innocent actions are coming across to those of cultures and ethnicities.

The author of the Gizmodo article makes the point, “it could be more respectful to make a costume overlay that puts the tattoos on the child’s own skin color, and they wear a T-shirt and leggings to match. However, that would not address the larger cultural appropriation issue that’s been brought up by some critics.”

As one Twitter user featured in the BuzzFeed article says, “My culture is not a costume.”

And if it’s offensive to a large group of people, society should seek to understand – and maybe encourage children to pick a different costume.

Do you agree this costume is offensive? Or no? Comment below with your opinions.