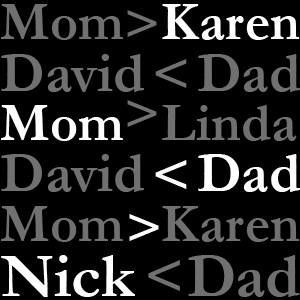 I don't know about you, but when I was growing up, calling my parents anything other than 'mom' and 'dad' wasn't going to fly.

It seems, however, that some things have changed. The Wall Street Journal reports that more kids are swapping out 'mom' and 'dad' titles for their parents' first names.

Madeline Levine, a Marin County, Calif. therapist – who specializes in teens – told the Wall Street Journal that the trend is happening more and believes that this shift is "fallout from an era of overly permissive parenting."

Some experts agree with her and say that the use of a parent's first name can develop a "friend-like" relationship style that can get very complex, very quickly. Still, others believe that the behavior is simply classic boundary testing, typical of teenagers.

Diana Kapp, the author of the WSJ article, told Wall Street Journal reporter Tanya Rivero that distracted parents are actually another reason for this name shift. You kid is saying 'Dad' "14 times" and you're not looking up, so they are going to switch to your name – and then you'll actually look up.

Hayden Mathias has been calling her dad by his first name for this exact reason. "He honestly doesn't answer to Dad," Hayden told The Journal. "I say 'Dad, Dad, Dad, Dad,' and then I say 'Dave,' and he pops up. Now I can't help it."

And her dad, Dave, doesn't view this trend as a negative thing. He knows she simply wants his attention, so he has allowed her to address him on a first-name basis for over a year.

The Journal also points out, that many kids these days have been given a bit more lenience when addressing authority figures than those of the past. Many kids call their friends parents by their first names (I called my closest friend's parents 'Mom and Dad No. 2') and some teachers allow their students to call them by their first names, as well.

Nevertheless, in the past, calling your parents anything other than mom and dad was likely to get you a one-way ticket to grounded town, or at least a crooked eyebrow until you retracted your statement. And most parents, it seems, still see it that way.

"My kids have never called me by my first name and they had better never do so," Michael Markovitch commented on the article by The Wall Street Journal. " I have been my children's father since their conception. I will be their father eternally. I am not my children's friend. I have done things, and am willing to do things for my children no friend would ever do. And for many years I was both father and mother to my children. I earn the title "Dad" every day, no matter the age of my children. "

The man has a point.

If your kid is calling you by your first name, experts say to start convo with them about it – ask why they are doing it. And if you want them to stop, tell them.