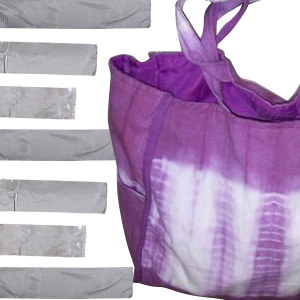 Little tykes get popped into all sorts of small spaces and places. Y'know: Play-set tunnels, baby bouncers, car seats, pint-sized playhouses. There are some spots, though, that are just not cool. More than that, they're commonsense off-limits – if not flat-out dangerous. Most certainly, plastic storage boxes and slouchy tote bags rank high on the list. And yet, in today's Oh Mother, that's precisely the state of affairs in a pair of strange child "confinement" tales from the Midwest and west coast.

Duct tape and plastic storage boxes are common household items – but a Columbus couple allegedly turned them into punishment chambers for their young kids.

Ohio parents James Allen Taylor, 29, and Samantha Marie Taylor, 26, are facing child endangerment and unlawful restraint charges after their three children – ages 5, 6 and 8 – were found inside plastic boxes that were sealed by duct tape as a punishment. When a family friend found the kids, they were in fetal positions and lying on their backs, prosecutor Jeffery J. Bruzzese told the Associated Press.

All three children have been removed from the home and are said to be in "good health," the AP noted.

It is terrifying for a new mom to imagine some lady kidnapping her baby from the hospital. It's even more chilling to picture her casually dressed in nursing scrubs – and trying to sneak the infant out in a tote bag.

That was the case of 48-year-old Grisel Ramirez, who was caught in an attempt to snatch a newborn from Garden Grove Hospital in southern California. Ramirez, wearing hospital attire, went to the mother's room and told her she needed to shower before the doctor examined her. While mom was in the shower, Ramirez nabbed the tyke and put it in a purple tie-dyed tote bag. Luckily, baby was wearing an electronic monitor – so security was alerted once Ramirez tried to exit out of a locked door.

Why did she attempt this abduction? The Associated Press reports that Ramirez faked a pregnancy and was being pressed by her estranged husband, who wanted to see the baby. Investigators say she has no past history of mental illness.

The baby-napper also faces five charges of first-degree burglary. She will be held on $1 million bail and will be arraigned on Aug. 31. Ramirez may spend over 19 years in prison if convicted.