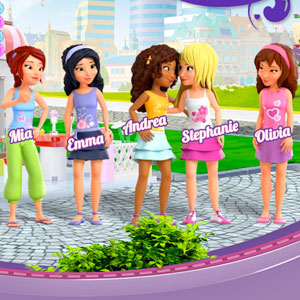 Watch out, boxy boys. Lego Friends, Lego’s new girl-focused line, started taking over toy store shelves in January. And, since then, these Legos – which have a pink-and-purple color palette and redesigned, slimmer figurines – have been hot, making the bestseller lists at both Amazon and Walmart.

But in the inaugural weeks of the launch, gender-equality activists were up in arms, saying the line promotes “gender-stereotypes” and “reinforces traditional female roles,” notes feminist blog Jezebel – with play sets such as the Butterfly Beauty Shop.

Should parents be concerned that toys are encouraging their kids to lead gender-specific lifestyles? Or are toys simply, well, toys?

The new Lego line that’s been both appealing and offensive includes a wide range of play sets geared toward girls – and is accompanied by a new set of named characters: Mia, Andrea, Olivia, Emma and Stephanie.

And these girlfriends don’t look like the typical blocky, gender-neutral figures that Lego is known for churning out. The characters have slim bodies, are taller and have shapely faces (vs. the standard yellow block head) – even defined ankles.

Carolyn Costin, an eating disorder specialist and the founder of the Monte Nido Treatment Center in Malibu, Calif., started an online petition to “stop Lego from making and marketing toys filled with stereotypes and promoting body dissatisfaction,” according to the petition’s webpage.

SPARK, an activist movement protesting the sexualization of girls, sent an open letter to Lego voicing their views on the Lego Friends line.

“This is not about the color of your building blocks or your Friends’ line; it’s about the lack of faith you have in girls’ skills and interests,” they wrote. “It’s about your distorted notion that, in order to buy LEGO, girls need messages about the value of shopping, clubbing, baking and tanning.”

According to the Jezebel article, more than 51,000 have signed the statement.

What Lego is saying

Lego released a statement in January combating the criticism, saying that the line was created following customer demands for Legos that appeal to girls.

This comes after “four years worth of comprehensive, global research” to “understand what would make LEGO play more interesting for girls,” he wrote.

“We hope that we will engage even more girls in the skill-developing experience of LEGO play,” Nipper concluded.

What parents have to say

She has not purchased any Lego Friends for her 2-year-old daughter Jaliyah, but she says her friends have bought them for their daughters.

Crivella says she thinks that there are gender-stereotyped toys, such as Barbies for girls and monster trucks for boys, but she doesn’t see the gender-focused LEGOs as being an issue.

“I think Lego Friends is just an expansion of LEGOs that is attracting girls because of the girly colors – just as dress-up costumes, pink Barbie packaging or little mermaid coloring books,” Crivella says. “It’s the same thing when boys are more attracted to Spider-Man figurines or remote control cars.

“The argument can also be flipped around to say the original LEGOs were more gender-specific to boys,” she continues, “because the colors were red and blue, which are typically associated with boys.”

Although Crivella doesn’t see a problem with the toys, she also doesn’t have a problem with what people are saying against LEGO Friends, because “everyone is entitled to their opinion.”