An unidentified teen used references to Hitler and Nazism to ask a classmate to a school dance. She got a 'yes' but is also facing backlash – and rightfully so. 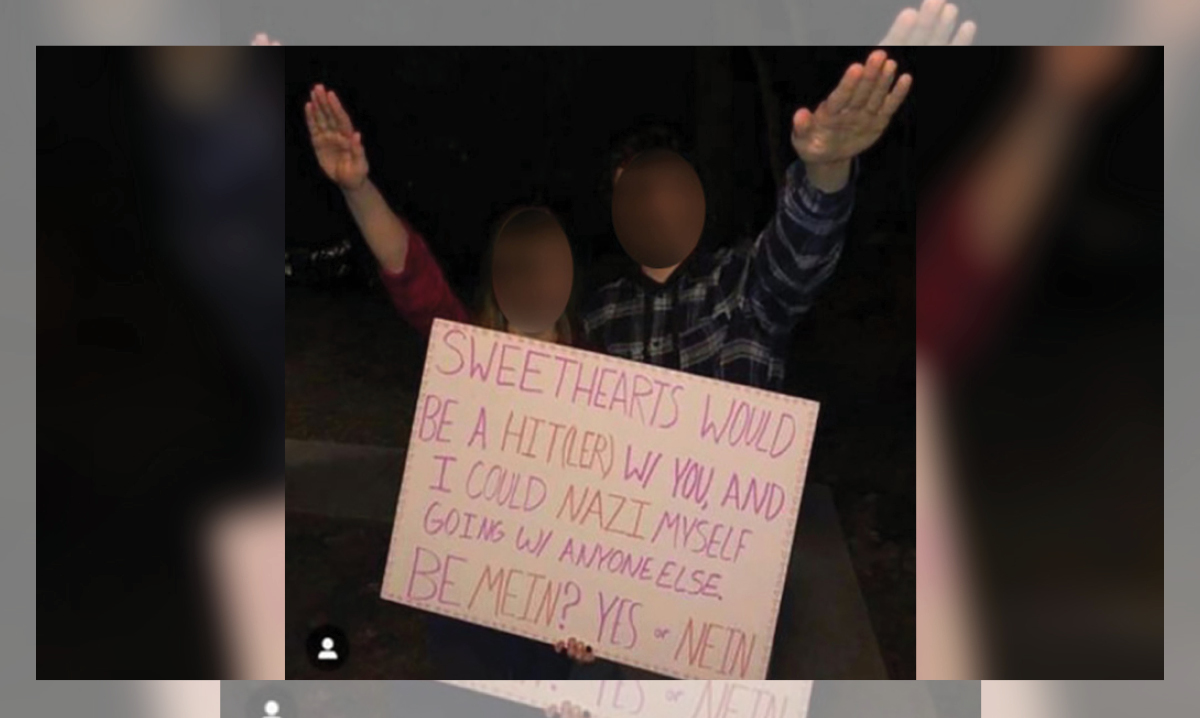 Not too long ago, it was understood there are certain things that decent human beings shouldn’t do – simply because they’re wrong. Shaking babies, abusing animals and glorifying groups of people that believe in human genocide were among those things.

These days, though, it appears that some believe it is acceptable to tip-toe on that line – because one high school teen in Minnesota asked her date to a school dance with a tasteless Nazi-inspired dance proposal (aka an over-the-top invitation to a school dance).

According to CBS Minnesota, the female student asked the male student to the school’s Sweetheart Dance with a revolting sign that read “Sweethearts would be a Hit(ler) w/you, and I could Nazi myself going w/anyone else. Be mein? Yes or Nein.”

When the boy she was asking said yes, the student posted a photo on her Finstagram of her and her date giving the “heil Hitler” salute with the sign – and a caption that read “… I would like to state I am not anti-Semitic in any way, I hate all races equally.”

Naturally, people were appalled by this behavior and began calling for some disciplinary action against the teens.

In addition, Rabbi Tzvi Kupfer, the advisor of Minnetonka High School’s Jewish Student Union, reportedly said that several of the school’s Jewish students – including some who lost family in the Holocaust – are concerned about their safety if they return to school.

The principal at the student’s high school emailed parents to condemn the post and reassure them that the school is committed to create a safe and positive environment.

The student in question also removed the post, deleted her original account and issued an apology on a new and private Instagram page, stating, “I hope you all know that in no way did I mean anything by it,” “there was no intention of hurting anyone” and “I also realize how awful it is to make light in anyway of the horrors of Hitler and the Holocaust.”

And yet she did anyway.

Look, I know that kids do stupid crap – I’m pretty sure my alma mater has a book that documents all of my moronic teen moments, and I know that you have some “gah” moments of your own.

But Nazi-ing all over a school dance is something I could never fathom doing.

Why? Because even as a teenager, watching historical documentaries on the Holocaust made me sick to my stomach.

Seeing human beings inflicting that level of pain and suffering on other human beings was disturbing, and it’s only right to give the victims of that dark event a certain degree of respect.

To be fair, a 2018 survey found that two-thirds of American millennials don’t know what Auschwitz is – and 22 percent have never heard of the Holocaust, which is highly alarming since, as it’s often said, “those that don’t know history are doomed to repeat it.”

That said, the school these kids attend offers presentations by families impacted by the Holocaust, and media outlets are reporting that at least one of them had attended this presentation.

But even if they didn’t know, a quick Google search of the word “Hitler” would provide all the information that they’d need to realize it’s not appropriate.

While it’s true that Americans enjoy certain rights and that these kids probably were within those rights, it is also true that just because you can do something doesn’t mean you should – and this tacky and apathetic display should have never happened. Period.

What do you think of this dance proposal? Was it just plain wrong or do you think it has been blown out of proportion? Let us know in the comments.