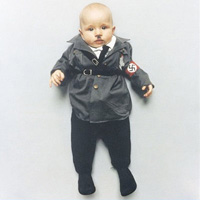 Babies and pure evil aren't exactly synonymous, unless you're maybe talking Stewie Griffin from Family Guy. Even so, there's something extra jarring about seeing a real-life, cherubic 4-month-old all swaddled up as Adolf Hitler – complete with toothbrush mustache and swastika armband.

That's partly the point, according Nina Maria Kleivan, the Danish-Norwegian artist who dressed up her daughter in the pint-sized Nazi costume, which she stitched herself – now almost a decade ago. Ditto for nine other of the "most evil historical figures of the 20th century," from Joseph Stalin and Benito Mussolini to Saddam Hussein, according to Haaretz.com, the online edition of Israel's Haaretz Newspaper.

"The people I let my daughter portray didn't give a damn about the human cost, the casualties, their thoughts caused," the mom of two told Haaretz.com. "You need to be conscious that your actions have consequences that impact on your fellow human beings.

"The responsibility is yours alone," she continued. "You can't throw it away – as a parent, as human beings – and say that you just followed orders."

Granted, it's a pretty profound thought. After all, Adolf was once but a wee harmless tyke himself; then an outcast kid who just wanted to be an artist. Certainly gives you something to reflect on.

But, not surprisingly, Kleivan's decision to use her own kid as the subject of a photo series aptly titled Potency still draws heated response to this day.

"Inappropriate is too mild of a word," as one article-commenter named Kate put it. "No matter the intentions, children should never be 'used' to convey a message – no matter how relevant, how important." Another, Saul A. Readner, went so far as to dub it "another kind of child abuse."

Now, you might be wondering: What mom of a newborn has the time for this sorta thing? There might've been a bit of "idle hands" at play.

After Faustina was born, mom was hospitalized with severe pelvic pain for a couple months, Haaretz.com reported; then wheelchair-bound at home for four more. "Bored out of her mind and incapable of accessing her studio, she found a canvas in her newborn daughter," Morten Berthelsen writes.

It seems Kleivan may have been working out some demons, too: Apparently, her dad had been captive in a German prison camp. Yet, even her own husband reportedly had a hard time stomaching the "mini Hitler" – the version that's drawn the most horror.

"I agree it's on the verge, especially Hitler, whom I and most others view as the incarnation of evil," she told the paper. "He and Stalin were the hardest to do. It hurt."

So, now that tiny Faustina is an 11-year-old tween, is she showing any signs of "ruling Denmark with an iron fist"? Not exactly. Though she does show "a remarkable talent for playing the violin."