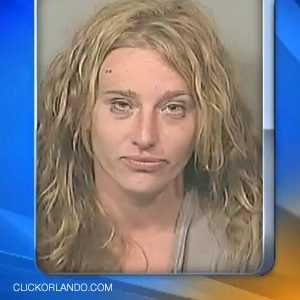 "I'm going to call the cops if you don't behave!" In parenthood, this idle threat is about as common as "You better be good or I'll tell Santa." But, unlike 27-year-old Florida mom Melissa Townsend, most of us never pick up the phone – let alone dial 911.

Yep: Townsend indeed called the cops on her 1- and 3-year-old toddlers on March 12 because, as Orlando-area TV station WKMG Local 6 reported, she wanted the police to "scare the sh-t out of" her kids.

Granted, many news-watchers scoffed – or muttered "go figure" – when it turned out Townsend reportedly was drunk (she ultimately "kicked an officer in the groin multiple times," WKMG noted; more on the police arrival in a minute). But it's also unleashed a wave of web commentary on the effectiveness of this behavior reinforcement tactic.

"Worked law enforcement for many years; that just pisses me off," grannynannyjam opined on Jacqueline Burt's article on the topic in The Stir. "When people would be in public or come to the station to threaten the kids with cops, I would tell them to stop. What if a real emergency or situation came up where they needed officers – and the kids were too scared and fearful to call the police or 911? Be (a) heck-of-a backfire on the parents."

However, others think the method works in some situations – and can help.

"I have called the police on my 6-year-old child once, because his dad caught him stealing gum from the store. This was my son's second attempt at stealing, even after we told him how wrong it was and what could happen if he continued," mom Jessica Schmidt countered, also on The Stir's article. "The officer did not come out to 'scare the sh-t' out of him; just to explain to him that he could not do that. The officer was calm and not scary in any way. He just had a nice, long talk with him to avoid this type of situation again. And it worked: My son has not attempted to steal anything since."

In the Townsend case, the police did show up – to be greeted by an inebriated, thrashing mom. It might've been a good thing law enforcement came: Not to teach the kids a "lesson," but rather, to get them out of a bad situation (they're now staying with relatives). Townsend was charged with numerous violations, the Huffington Post reported, including child neglect, officer battery and probation violations.

Still, some are arguing that, as a parent perhaps at her breaking point, Townsend did the right thing.

"Main reason why I think this entire thing is stupid: I'd rather call the police for help vs. beating a kid," mother Heather Marie Rowe-Burnett commented on HLNtv.com (a CNN Worldwide network). "Luckily, I have never been put in that position, but she shouldn't have been charged (for) neglect for this."

Others weren't as sympathetic.

"If she can't get her 1- and 3-year-old to listen to her, maybe she should lay off the alcohol for a while and take some parenting classes," CMLeach commented on the HuffPo article.

However, Cafe Mom blogger Burt – who wrote The Stir piece – thinks this could serve as a much-needed wake-up call and cry for help for Townsend.

"Clearly, Townsend is unstable and most likely has been for some time – you don't just go from being completely sane and centered to calling the cops on your toddlers overnight," she blogs. "I'm not trying to make excuses for the woman, but I'm willing to bet she could use a little more support in life. Fine – a lot more."