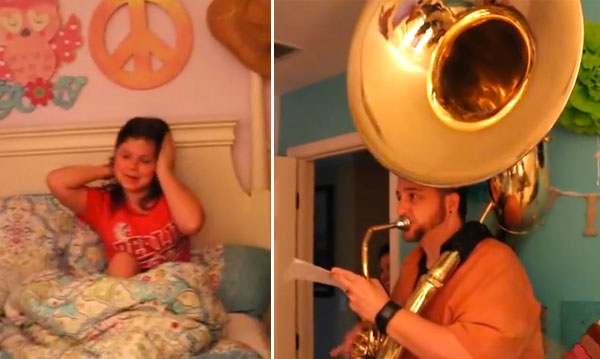 The band, Blair Crimmins & the Hookers, marched into the girl’s room and surrounded her bed at 6:30 a.m., Today reports. Sophie bolted upright when they began to play their song “Run That Rabbit Down,” ABC News notes. She can be seen in the video brushing her hair back from her face contorted in complete shock as the members – including a tuba and a bullhorn player – bellow the tune. Eventually, she managed a curious smile, and as the musicians took their fanfare downstairs, a member put a phone to the stunned girl’s ear. Watch for yourself!

On the other end was radio host Bert Weiss of The Bert Show, which has recently begun to execute “drastic measures” to assist parents in waking their sleepy kids as part of the show, according to Today.

“Are you up now?” Bert asks Sophie. “Yeah,” she replies sleepily. They exchanged laughs, and the host joked that the band will return every morning for the next five weeks if she continues to pull the covers back over her head every time her mom comes in to wake her in the morning

“I guess I’ll have to buy some earplugs,” she jested in turn.

The associate producer of The Bert Show Davi Crimmins told Today the show recently made a shout out to parents who have trouble waking their kids now that the school year – for some – is back in full swing.

“We got a huge response,” she said, according to the article. “We talked to these parents and they said they’re spending 45 minutes each weekday trying to wake their kids up! So we wanted to help.”

As reported by Today, the station brainstormed solutions that ranged from bagpipes and drill sergeants to the cast of a local Rent production singing “The Circle of Life” from The Lion King. One actor even nabbed the girl’s guinea pig to pretend it was Simba from the Disney film.

As for Sophie, her mom insisted she was delighted, not mad.

“She had no idea,” Kent told Today. “And the band was incredible. They arrived here around 5:45 a.m. We planned everything downstairs, and I had a loud fan on upstairs to mute any noise. They snuck in very quietly.”

But from the video, I gather mom’s the one with the wider grin on her face.
Either way, Kent insisted the fanfare did some good. Sophie’s been an earlier riser ever sense.

Something tells me the roommate I lived with last year who’d hit her snooze button for over two hours on the daily wouldn’t have been as enthused. And I imagine this new mode of alarm could get expensive incredibly fast, but it’s fun to watch while it lasts!

I have to say, if I got to wake every morning to a live rendition of the “The Circle of Life,” I’d be a much more productive early bird.

What do you think? Are The Bert Show’s wake-calls humorous or excessive? What are some creative ways you’ve woken up your sleepyheads?