The woman was completely covered as she breastfed her 7-week-old and was apparently nowhere near anyone's sons, but that didn't stop a nearby cretin from berating her over it. 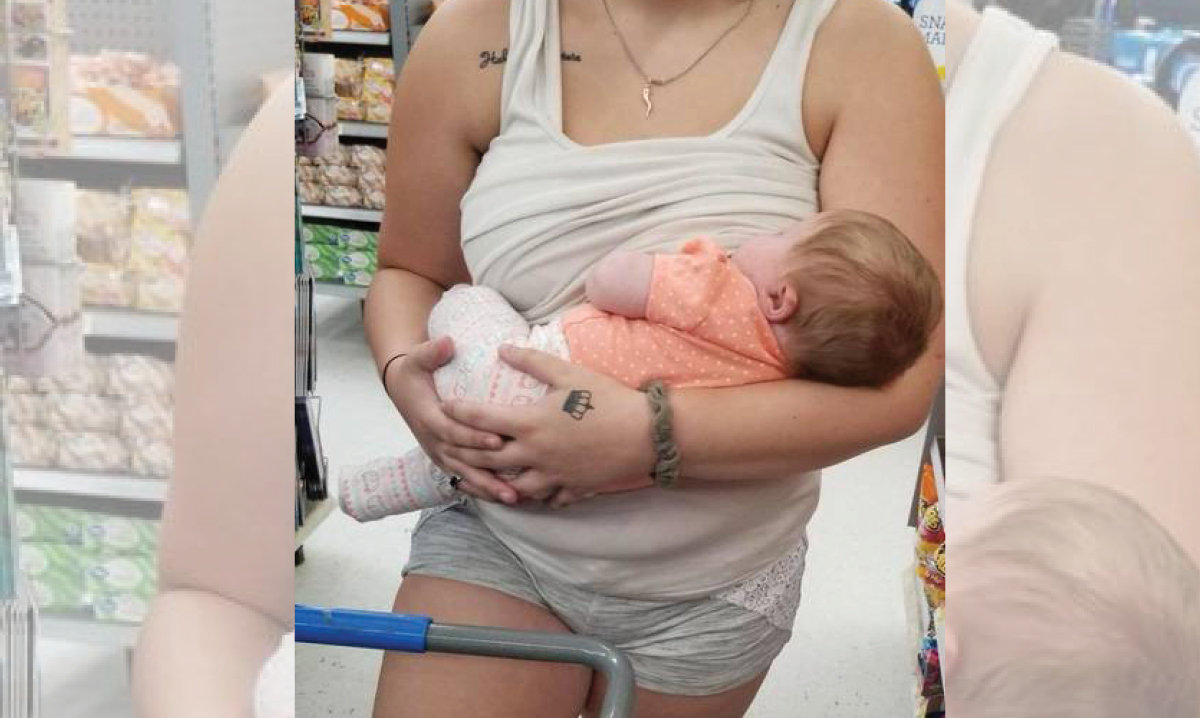 Ladies and gentlemen, I’m about to shatter your whole world: Women have breasts, and those breasts are made to feed babies. Sure, they can be sexual too, but at their very core they exist so that infants don’t starve.

And yet, that very simple concept is at the center of a raging debate among both parents and non-parents: breastfeeding in public.

Some folks, like myself, see it and continue on with their day because mom is just feeding her kid, and breastfeeding is beneficial to the both of them. Others get huffy and puffy about the possibility of seeing a nipple and demand that mom stuff her baby under a blanket to eat – no matter the weather, mom’s comfort or the baby’s tolerance for being covered.

Though it is legal to publicly breastfeed both covered and uncovered in all 50 states, some moms oblige the request to cover themselves. But now it seems like that isn’t even enough for some people – including the woman that Aleigha Jean ran into at her local Walmart.

Aleigha explains in a post on Facebook that her 7-week-old daughter awoke from her nap hungry. So Aleigha did her job and discretely slipped a nip in her baby’s mouth.

Mind you, she’s completely covered, from collarbones to mid-thigh. In fact, the baby looks more like she’s sleeping in mom’s arms than eating. A nearby mom, however, saw what she was doing and went off on her, reducing the new mom to tears.

Apparently, the woman didn’t like that Aleigha was breastfeeding in public and insisted that her 5- and 7-year-old sons didn’t need to see it, despite the fact that her sons weren’t even there.

And that’s what really sticks in my craw about this story.

This woman was not trying to stick up for her sons’ well-being – she was uncomfortable and was using her kids as a tool to try to get her way at the expense of an infant and a fellow mom.

Luckily, the woman’s childish outburst has not pushed Aleigha to wean her baby before she’s ready. Instead, she says she’s going to keep breastfeeding her baby and wants to other women to be empowered to do the same.

“It is OK to feed your child whenever, and I hope I encourage more women to breastfeed in public, because it’s an amazing, beautiful thing,” she told CafeMom. “I will never stop, especially not because of some lady whose opinion doesn’t matter to me.”

What do you think of breastfeeding in public? And how would you react if a woman breastfed her child in front of your kids. Tell us in the comments.

Brought to you by Academy of the Sacred Heart.
Read more
Macomb County Activities

Try these things to do with your kids in Macomb county while they’re out of school for mid-winter break.
Read more
Attractions