Popping placenta pills to improve postpartum health is a well-known trend in the mom-verse but as moms get creative about it, we're asking you to weigh the facts before chowing down. 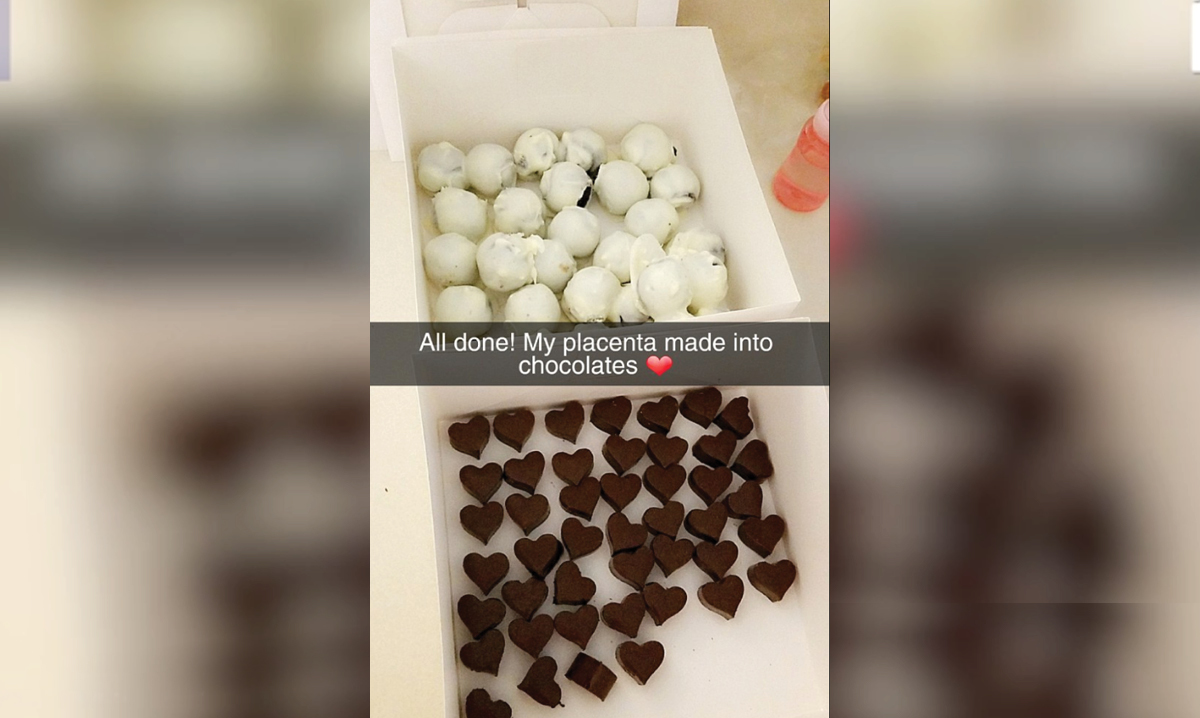 Have you ever heard of eating your own placenta? Personally, I think it’s a little odd to snack on your baby’s in-utero digestive system like it was a piece of turkey jerky – and I’m the tree-hugging type – but I can see the allure.

Proponents of eating placenta claim that ingestion of the placenta can decrease the likelihood of postpartum depression and increase breast milk production, so moms everywhere are steaming, boiling and encapsulating their placentas in hopes of reaping those benefits.

But some moms have gotten a little creative in how they make it a little more palatable, including 23-year-old mom, Kiley Whitworth. Whitworth hired a professional doula one day after giving birth to her son to help her make her placenta into chocolates.

She documented the whole process on Snapchat, which started with a photo of her raw and bloody placenta on a cutting board. Next, the placenta was plopped into a pot to be steamed, chopped and moved into a dehydrator where it chilled for 16 hours. Then, it was mixed together with chunks of Oreo and put into heart-shaped molds to be hardened.

To be frank, the placenta chocolates don’t look too bad and mom said that they were “yummy.” But we’re really hoping that she labeled them separately from any other store-bought goodies in the house – can you imagine the blowback if you accidentally served that at a party? Yikes…

Her placenta truffles caused quite the uproar on social media with some folks calling it gross – but I’m not into mom shaming so I’m not going to go into it any further than that. You turning your placenta into chocolates is something that isn’t going to affect me in any way. I wouldn’t do it, but if that’s what you want, then bon appetit.

What I do ask of moms thinking about jumping on this train, however, is to research heavily before you make a decision.

A 2017 study published in the American Journal of Obstetrics and Gynecology found no evidence proving any of the potential benefits to eating your placenta. In fact, it found that placental nutrients and hormones are not retained in sufficient amounts after the encapsulation process to be helpful.

It also found that harmful bacteria may survive the process, which opens you and your baby up to diseases. In 2016, the CDC reported a case of an infant who caught group B Streptococcus agalactiae, which caused sepsis and landed the baby in NICU, all because the mom’s encapsulated placenta was tainted with the bacteria.

What’s more interesting is that the study also found that more than half of obstetricians and gynecologists said they were uniformed or unsure how they feel about the trend, which makes your vigilance as a soon-to-be mom even more important.

Did you eat your placenta? How much research did you do before making your decision? Tell us about it in the comments below.