Neighbor Shames Parents for Living in an Apartment 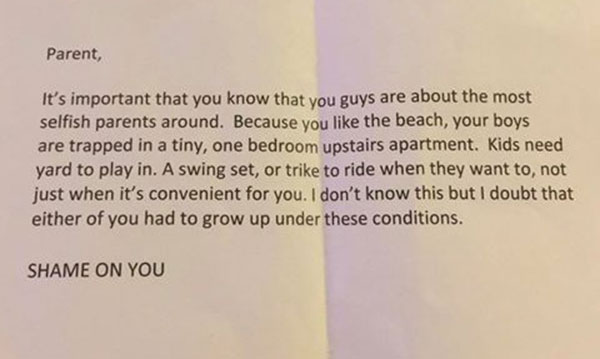 I am feeling so annoyed for two parents who live in Mission Beach, California. Kelly and Mike Brüning, parents of two boys, received a nasty anonymous letter shaming them for living in an apartment with their children from a clearly bored neighbor with nothing better to do.

Here’s what the letter says:

The parents – who have lived in their two-bedroom apartment for nine years, according to The San Diego Union-Tribune – were naturally “shocked” to open this piece of mail.

Kelly, who is a stay-at-home mom, tells the Union-Tribune, “It’s unthinkable that someone would go through that process and think it was OK to send that sort of thing,” – and also, “I’m wondering whose eyes are on me.”

“It’s a scary and strange feeling to go through.”

I don’t understand the concern from the neighbor here. Especially because:

Clearly, somebody had a lot of confidence behind the keyboard one night. It’s obvious these parents aren’t doing anything wrong. They’re not living in an unsafe, unsanitary, hoarder-situation apartment. Maybe then you could show concern. But this seems like a perfectly fine living situation to me.

Obviously this neighbor didn’t care to get to know their neighbors before making harsh judgments about their parenting. That’s the true shame.

Apparently, the Brünings are a nice family willing to look past the incident. Mom told the local paper that she would tell the person who wrote the letter it’s fine they have an opinion, but they need to know the truth: they love their living situation.

“You know what? We love our boys,” she told the outlet. “We give them a life we think they’ll appreciate later on.”

What do you think of this neighbor’s nasty letter? Do you think it was an OK concern to have – or is the neighbor plain out of line? Comment below.