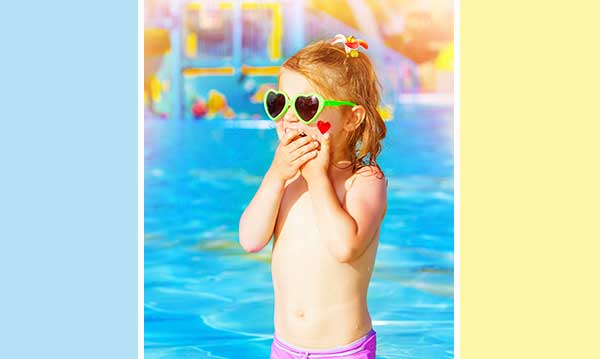 In a world where teens are sent home from school for outfits that could be “distracting” to boys and women are shamed for nursing in public, it’s sadly not surprising that apparently we have lifeguards busy making little girls cover up their chests before they even have breasts.

The parents of an 8-year-old girl are speaking out after their daughter was stopped by a lifeguard at a public pool in Ontario, Canada and asked to put on a swim top, Yahoo Parenting reports. Her mom and dad say it was clearly a case of the city sexualizing and shaming the little girl.

“I think it’s completely sexist, and the city’s sexualizing little girls,” the girl’s mother, Anika Warmington, says in an interview with CTV News. “If they want children to wear clothing from the neck down, then all children should have to wear it.”

The girl’s dad raises another important point: “She’s 8 years old, and she’s been sexualized by a stranger – and, at the same time, shamed into hiding this mysterious sexuality that she’s too young to even understand,” Cory McLean says in the CTV interview.

If you’re thinking age 8 might be cutting it a little close for going topless, consider this: The pool rules state any girl age 4 or older must wear a swimming top. That’s right, little girls young enough to potentially still be in diapers are even too old to be seen without a top on. And this is in an area where it’s legal for adult women to be topless in public places.

The family’s visit to the pool was impromptu and the parents saw no issue with letting their daughter follow her brothers into the water. Some young girls might feel compelled to cover their chests by age 8, but at what point should we pressure our children to live up to gender-based societal norms? If this girl felt comfortable swimming sans top, why shouldn’t she be allowed to?

The city’s parks and recreation manager is quoted by CTV saying the swim-top rule was made to “provide a safe and enjoyable recreational experience” for everyone. Since she didn’t elaborate on what that means, we’re left to assume the rule serves no real function.

Of course, parents are certainly aware that creeps and pedophiles could be present anywhere and that fact alone might be reason enough to insist on their kids wearing as much coverage as possible at a public pool. Does covering up more of a child’s body make a pervert any less perverted? To be safe, perhaps swim tops for girls and boys could be a smart choice – and there’s no doubt it’s better for sun protection.

There are also parents who buy itty-bitty bikinis for their toddlers and while some may judge that choice, the fact is there’s absolutely nothing sexual about a child’s body and anyone who would think otherwise is the one with the problem.

We can’t change the weirdos of the world, but we can question rules that single out girls and leave them wondering why their prepubescent bodies should be covered while the identical chests of their male counterparts shouldn’t be.

Unfortunately, it seems like another case of our puritanical society being more afraid of nudity than we are of things that are much worse. Look even at how we grade our media: A movie like The Hunger Games where scores of kids get murdered for sport is rated PG-13, but if a bare breast was shown it probably would have received an R rating. Violence is OK, but women’s bodies aren’t. Where are our priorities?

Do you think the rule about swim tops should be changed? Tell us in the comments.