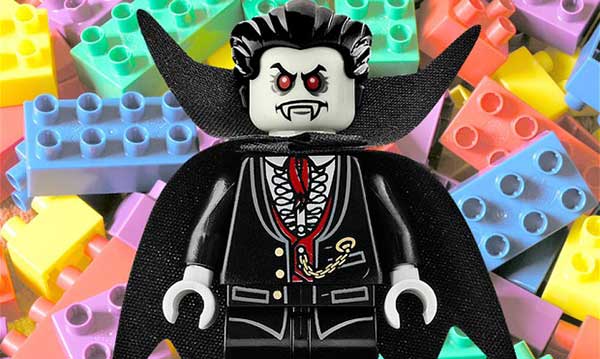 Parents, in case you didn’t know, Legos are evil toys, and will “destroy” your child’s soul. At least, that’s according to the Rev. Slawomir Kostrzewa of Poland.

Kostrzewa apparently gave a presentation calling out Lego for making Monster Fighters and Zombie mini-figures, which features a vampire mini-figure, among others, according to The Telegraph.

“Friendly fellows have been replaced by dark monsters,” Kostrzewa warned. “These toys can have a negative effect on children. They can destroy their souls and lead them to the dark side.”

He also cited research by the University of Canterbury in New Zealand that found Lego figures’ faces have become angrier over the years, as The Telegraph reports.

Well damn the Legos to hell! Satan will now surely infiltrate the minds of our young ones and cause them to partake in evil wrongdoings. Mini-figure Lord Vampyre has succeeded in “inflicting eternal darkness upon the world,” which his Lego video story says is his aim, after all.

Super Express newspaper interviewed psychologist Monika Filipowska, The Telegraph reports, and her response was, “These are just blocks.” Basically, she says, now what will happen is kids will be afraid of Legos. Not cool, Rev. Kostrzewa!

At least according to The Telegraph, Lego isn’t the only kid-related creation Kostrzewa has deemed an instrument used by the devil to brainwash our children. Hello Kitty and My Little Pony (which he called a “carrier of death”) have also been thrown under the bus.

Well, you’ve officially been warned, I guess. Do with it what you will. But it sounds like the image of hell this priest has created in my mind would be full of primary-colored blocks, adorable cartoon kittens and ponies in pastels. Doesn’t sound too scary to me.