‘Put Down Your Phone’: Parents Upset About Judgmental Sign

Parenting posters found in a San Francisco neighborhood have some parents outraged. But what's wrong with a reminder to be present with our kids? 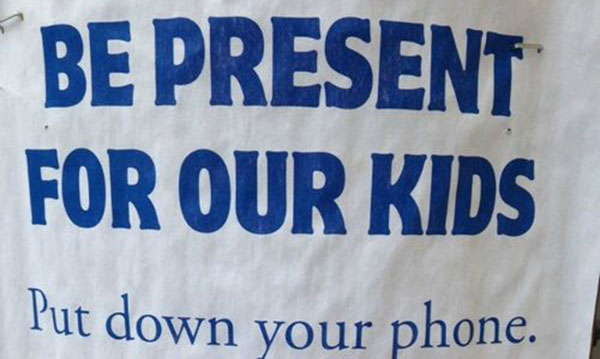 What would you think if a sign at your local playground told you to put down your cellphone?

That’s what parents in one San Francisco neighborhood found recently and not everyone is appreciating the advice.

The posters apparently started popping up stapled to telephone poles and other places in the area of Bernal Heights.

“If you are wondering just how insufferable #SanFrancisco has become just read the telephone poles in #Bernalheights,” journalist Gordon Young tweeted on March 23 with a picture of one of the signs.

The photo shows a poster that reads, “Be Present For Our Kids. Put down your phone. Stop checking email. Limit screen time. Turn off your TV. Read books. Go outside. Enjoy!” (Not surprisingly, someone added “don’t tell me what to do” at the bottom corner of the page.)

Many parents aren’t taking too kindly to the unsolicited advice, including one writer who blogged about it at ScaryMommy pointing out that many moms like herself are tied to their phones as a matter of necessity due to work.

“The average parent spends plenty of time being ‘present’ for their kids and just because they tune out on their phones or turn on the TV now and then doesn’t mean they need to be guilted and shamed for it,” she writes.

Besides, “Kids need a chance to explore their world without a parent hovering over them,” she continues, in part.

Others say the posters are making an important statement and anyone who takes offense is just dealing with their own guilt.

“The signs do irk me a little, but I think it comes from a place of guilt,” Jessica Birdwell commented on a story at TheStir about the issue.

I think anyone can agree that the delivery of the message – random signs posted in your neighborhood by who knows who – can come off as a little offensive. Everyone has different reasons for being on their cellphones at various times of the day for work or play. As many parents are quick to point out, that trip to the park while your little one is occupied with friends might even be the only time you get a moment to yourself.

And any working parent can understand why the “stop checking your email” bit crosses the line. We all know moms and dads who would love to stop checking their email but have to stay on top of it if they want to keep their jobs.

That said, too many kids are growing up with parents who can barely glance upward to look at a Lego tower, who can’t play Barbies without simultaneously texting or who sit at a restaurant browsing Facebook while their child eats in silence. I’ve seen parents doing this and I hate to think that I’ve probably been the one doing it, too.

Like it or not, it’s an important reminder. The poster seen here holds a ton of truth. The idea is really no different than a health department ad pushing breastfeeding, family dinners or the importance of well visits. Whether or not the advice applies to you, isn’t it possible this reminder is just as important for our kids?

And if you’re not that type of parent – you’re sure that the time you spend on your phone doesn’t interfere with being the sort of parent you want to be – then you really have nothing to worry about.

What do you think? Is the poster offensive? Tell us in the comments!