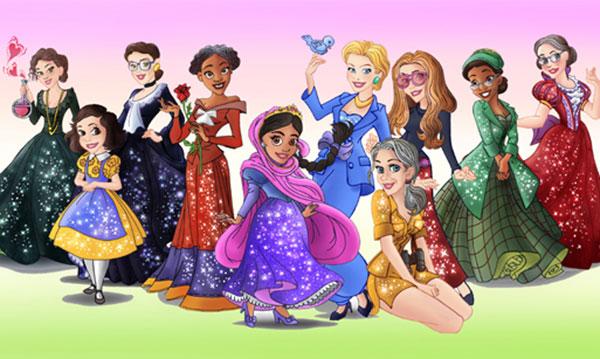 No doubt you can name off at least a few of the classic Disney princesses. The stories of Cinderella, Snow White and Belle and are well known – even embedded in our brains from childhood.

These princesses have a distinct image. Glitter galore, extravagant gowns and an extra helping of girly girl. But what about real-life heroines? Do they need glitz and glam to be recognized as role models? What if the women of history and today were presented as Disney princesses are?

Artist David Trumble actually did transform real-life women into princesses back in May after thinking about the outrage at Disney’s super girly makeover of Merida from Brave, which made the heroine more princess-like, he explains in a Huffington Post Parents article. The article is tagged as “satire” and is titled “10 Real World Princesses Who Don’t Need Disney Glitter.”

In an interview with Women You Should Know, Trumble explained, “I drew this picture because I wanted to analyze how unnecessary it is to collapse a heroine into one specific mold, to give them all the same sparkly fashion, the same tiny figures, and the same homogenized plastic smile.”

So what does the public think of these makeovers?

Some commenters on Huffington Post didn’t get the satire, and were offended by the sparkly Disney-esque versions of these women. Others appreciated the satirical take on the topic.

Huff Po commenter Dana Mintzer Leman told one offended commenter, “That was the point … we reduce poignant and powerful female role models by making them into Disney templates … which is precisely what they did with Merida, the fictional character. Women do not need to be princessified to be beloved by children … and Trumble selected the women children most often describe as their role models to depict the ridiculousness of this.”

“I absolutely think that these women do not need sparkles or pretty dresses or cutesy poses to be a role model,” writes another Huff Po commenter Its Julz. “They deserve recognition for who they are, AS they are. No changes necessary.”

For some, the art worked in a different way. Laura Wegkamp Cook wrote on the Women You Should Know article, “Actually, I have a completely different take on this. The fact is, if something is visually appealing kids are at least 10 times more likely to be interested in it. My 4-year-old daughter walked by while I was reading this and she was instantly intrigued. That gave the opportunity to talk to her about who these women are.”

What’s your take? Do you think this was a good way to bring attention to the over-glamorizing of female role models, or do you think it wasn’t necessary?