Reborn Dolls – and the Moms who Love Them 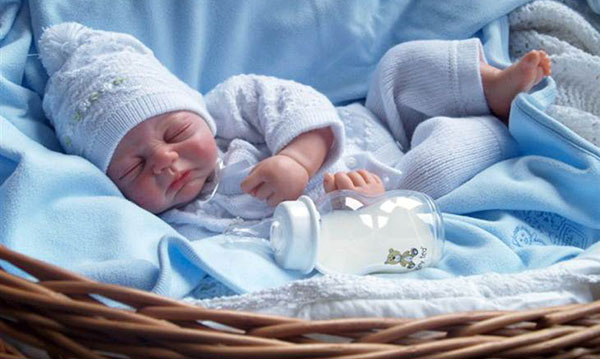 When I was a wee Kim, Thumbelina and I were like glue. That pouty, straw-haired kid went everywhere with me – from Larry’s Foodland to Mackinaw. I carted her in a baby backpack made out of a hand towel. Sewed her a Hawaiian-print bikini. Burped her. The works. Of course, ‘Lina was a doll. And our public appearances dwindled somewhere around, oh, first grade.

But with reborn dolls – and for some very grown-up moms – that sort of transition is kids’ stuff. Their bundles of joy, on the other hand? Hardly.

In fact, these “dolls” are so double-take realistic, at a glance, you’ll need to pinch yourself. As a recent MSNBC report on the reborn craze demonstrated pretty humorously. Today Show cameras followed collector Becky Lombard, 42, and her “baby girl” Annie – a sweet squirt swaddled in pink – into her local Curves branch. Like a magnet, and older woman zips over. “Hiiii!” she coos.

“I know. They’re so fun,” the stranger gushes, petting Annie’s chubby leg. A second or two passes. And – “Oh she is a doll! Omigoodness!”

Heh, heh – not just a figure of speech, eh? It’s a great clip. But some folks stop laughing and call “creepy” when they see hardcore hobbyists’ antics.

For Lombard, that includes a proper baby car seat and darling duds for her 10 (or so) total tykes. Wondering what they look like? Check out her YouTube channel, rebornprincess53. Yep: She makes home videos about them – with the happy help of her two teen sons. (In one of the most recent, two of her reborn toddlers take a joyride in Herbie the Love Bug – or a car that’s his doppelganger.)

While it’s been getting lots of web-ink lately (Anderson Cooper, calling it “one of the weirder things I’ve seen in a while,” also just snagged Lombard for an interview), the phenom first took off in the U.S. in the early 1990s. Custom-made by hand, these lifelike vinyl works of art are definitely not child’s play: They’re painted multiple times to create the “mottled color of newborn skin,” as a Reuters report put it, and have wispy mohair hair and eyelashes – even their bodies are weighted to have the heft of a real baby or toddler.

They fetch adult prices, too. Browse around eBay, and you’ll see reborn dolls going from a few hundred dollars to a “just born” that nabbed north of $3,000 in late February. One of the specialty artists who pops up high in Google hits, UK reborn artist Deborah King, a mom of two who’s also a social worker, even adds details like a magnetic hair ribbon – and, oh yes, a “heartbeat.” (Aside: She’s even created a charming baby orangutan named Teeto.)

Granted: They’re stunning. So much that some call them “living” (or “unliving,” depending on who you ask). But the public stuff? What the hey?

“I love babies,” Lombard told the Today Show, adding that her hobby started after she couldn’t have any more kids. “When I look into their faces, it’s like looking at real baby. It’s just that comfort in holding (them).”

Fellow collector Karen Dudar, mom to 28 reborns, says her supportive husband even built the crew a nursery. “I have a crib, basinet and it’s a whole complete nursery. It’s just a room set for them,” she told Today Show.

Other “adoptive” fans range from “grieving parents” to “nostalgic grandparents,” Reuters noted. But more often, it seems to simply be mid-age-ish gals (many real moms, too) who love cuddling a little sack of silicone cuteness – sans, of course, the very real baby stuff, like dirty diapers, nighttime wakeups and nursing.

In fact, Lombard just welcomed another little girl to the clan, whom she introduced on YouTube (she’s not alone in her reborn home vids, by the way – and the shorts tend to get great feedback). The new arrival is decked in a Hello Kitty ensemble, endlessly snoozing with out a fuss.

“I’m trying to find a name for her,” mom says. “I have a couple in mind, but I’m not saying anything until I really decide.”

One commenter pipes up, “You should name her Kimberly!” I totally agree. Or maybe something more whimsical. Like Thumbelina?