Primark, a popular UK clothing store, has been called out for selling padded bras for girls ages 7-13. Is the outrage overblown or justified? 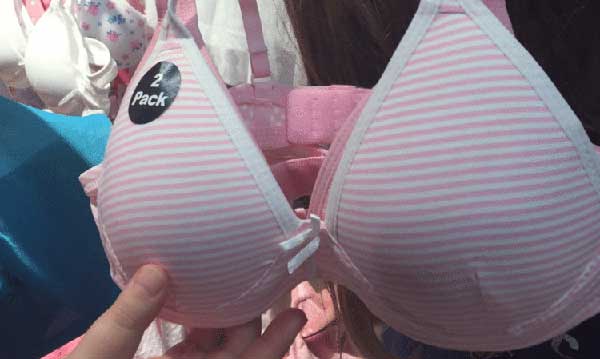 Today’s kids are much more fashionable than we were at their age. But, do you ever look at some of their ensembles and think they are too sexy or grown-up for a 10-year-old to wear?

That exact thought has crossed my mind before (just consider some of the Halloween costumes out there), so I wasn’t surprised to hear some folks were outraged to discover that Primark, a popular UK retailer – with some locations here in the U.S. – is selling a line of push-up bras for tweens and young teens.

“While the tag on the bras doesn’t specify an age range, most people are assuming they’re for girls between 7 and 13,” one CafeMom writer notes – “you know, the ages when girls start developing breasts and have to take that first awkward trip to the mall to shop for bras.”

With a name like “My First Bra” I’d say that’s a safe assumption to make.

This isn’t the first time the retailer has been called out for selling push-up bras to this age group. It happened last November so you’d think the store had learned its lesson – but apparently not.

The issue bubbled up again recently when a woman who was shopping at the retailer noticed the My First Bra line of bras and took to Twitter to express her outrage.

“Horrified that @Primark are selling padded bras to children aged between 7-13! #Toomuchtoyoung #Children #sexualisation,” she writes.

While many agree with her opinion, some don’t think it’s that big of a deal. “Get a grip. It’s a wee bit of padding not a push up bra,” one Twitter commenter writes.

A spokesperson for Primark disputed the “padded” claims, saying these bras are molded. “‘My first bra’ ranges are designed and constructed purely for support, comfort, and modesty and adhere to the BRC’s childrenswear guidelines. There is no enhancement.”

The bra in the photo above doesn’t look that modest, does it? Also, it looks like there’s a bit of an “enhancement” and truthfully, it IS a big deal. There’s no reason a 9-year-old needs a bra like this. She’s 9 – not 19.

Is it the sexiest bra I’ve seen? No. But is it still a bit too much for a tween? Yes.

Think about your first bra. If you’re anything like me, your first bra was a basic sports bra. And honestly, that’s how it should be at that age.

The tween years are rough. Kids are not quite teens but definitely not feeling like children as their bodies are starting to develop. Parents walk a fine line when it comes to what they allow their kids to wear during this time. They don’t want to dress like babies but they also shouldn’t dress like they are women because, well, they aren’t.

What do you think of these padded bras for tweens? Would you buy your child one? Tell us in comments.