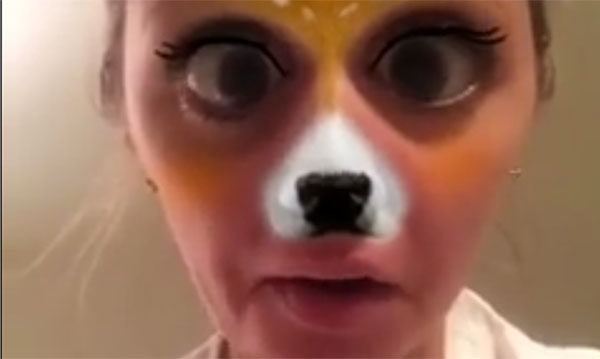 People aren’t messing around when it comes to their Kohl’s Cash, especially around the holidays. But what if you’re the person stuck in line behind a maddening display of Kohl’s Cash confusion?

That’s what happened to local mom Amanda Bell during a recent trip to the popular department store. She was standing in line behind a customer who was concerned about losing her Kohl’s Cash due to a return and Bell was in a rush because she had to pick up her kids from school soon.

So later on, the mom-of-two from Saline posted a hilarious video to Snapchat – with weird face and voice filters and all – about her experience. Take a look for yourself:

When she shared the video to Facebook on Nov. 30 and made it public, she became an overnight sensation. The video has more than five million views on Facebook and has been shared nearly 80,000 times as of Dec. 6.

MLive.com reports that Kohl’s itself has even responded with a funny video of their own, promising to “make it up” to her soon.

Bell told Babble.com that she’s a frequent Kohl’s shopper. “I shop for my whole family (there) and have already done lots of Christmas shopping there this year,” she says. On this particular shopping trip, she describes that she was “in a big hurry and the lady in front of me wasn’t!”

“Sure enough, they had three people on this woman trying to figure out her Kohl’s Cash,” Bell told Babble.

Response to the video has been mixed. Based on Facebook comments, most people seem to find it hilarious. But others think her tone rings a little entitled.

“You’re really going to question whether the lady in front of you knows that you have to (pick up) your kids? Seriously!? Unless she can read your mind no she doesn’t know. You’re frustrated b/c you’re not being helped,” Lanna Carpenter commented, in part. “…The lady wasn’t malicious to you. Your entitled attitude has you getting on here drumming up sympathy for you bc your weren’t helped as quickly as you’d hoped. Get over yourself!”

On the other end of the spectrum, there’s this comment from Shannon Harris: “Work sucked today and everyone was stressed. I showed this video to all of my co-workers and it totally made us all freaking laugh and changed our mood!”

Even JCPenny joined the fray, commenting in response to the Facebook video with this note: “Hey Amanda! Sorry to hear about your troubles. Private message us, we want help make your day better with a special surprise! ;)”

In any case, viewers should keep in mind that Bell told Babble.com how she’s a newly divorced mom and that sharing videos has been an emotional outlet for her.

“I know what it feels like to be struggling in life, relationships, money, kids, you name it,” she says in the Babble article. “And to have that one person say the right thing you needed to hear that day, or a funny video to show up on your news feed to turn your day around. We ALL need that!”

Have you ever been caught in line behind someone like Bell describes? Or have you been that person causing the hold-up? Tell us about it in the comments!

Try one — or all — of these easy breakfast ideas for kids when the school year begins.
Read more
At Home