Should Parents Be Worried About the 'Charlie Charlie Challenge'? 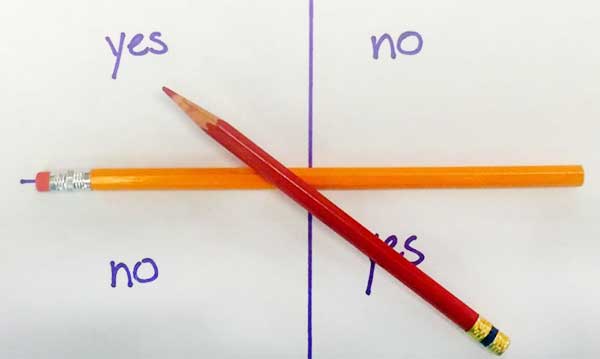 If you haven’t heard someone mention the Charlie Charlie pencil game yet, it probably won’t be long before you do.

Charlie Charlie, or the #CharlieCharlieChallenge, involves balancing two criss-crossed pencils on top of each other over a piece of paper with the words “yes” and “no” written on it. Then you ask “Charlie” a question and “he” moves (or doesn’t move…) the pencil on top to point to the answer.

One video on YouTube demonstrating the game, for example, was uploaded on May 24 and already has more than 2.3 million views. Another video uploaded the same day has more than 686,000 views.

The game may have originated in Mexico, some reports claim (and others refute), and “Charlie” might actually refer to a group of Mexican demons, according to CNN.

“There’s no demon called ‘Charlie’ in Mexico,” Maria Elena Navez of BBC Mundo says in the BBC article. “Mexican legends often come from ancient Aztec and Maya history, or from the many beliefs that began circulating during the Spanish conquest. In Mexican mythology you can find gods with names like ‘Tlaltecuhtli’ or ‘Tezcatlipoca’ in the Nahuatl language. But if this legend began after the Spanish conquest, I’m sure it would’ve been called ‘Carlitos’ (Charlie in Spanish).”

Whatever the origin, most parents are probably already very familiar with the game’s premise from their own pursuits on the Ouija board as kids. This game has some interesting and creepy elements (like you can’t just walk away from it – “Charlie” needs to give you permission to leave), but the overall idea seems about the same.

So should parents be concerned? Probably not. People seem to be having fun with it and we have to assume teens aren’t taking it too seriously. The most concerning thing we noticed in the Charlie Charlie videos was a lot of bad language.

Since the game seems geared toward teens and young adults – who likely understand that while it may be a bit spooky, it’s still just a game – parents probably don’t have to worry about this too much. It’s probably not a good idea for teens who are prone to anxiety or superstitions, though.

Younger kids, on the other hand, should definitely avoid Charlie Charlie – it’s a dark game, so parents should be aware of the trend just incase their little ones come home talking about “Charlie” and a fun new game they want to try.

Brought to you by Humane Society of Huron Valley.
Read more
Travel

Have an exciting spring break at these kid-friendly travel destinations.
Read more
Attractions