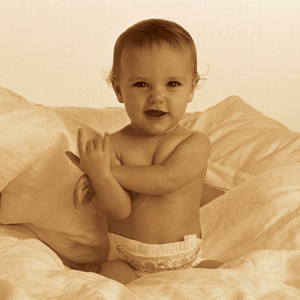 Worried about finding time to get intimate with your partner after a baby arrives? Take your cue from some Swedish moms: Have sex with baby asleep – in the same bed.

Shocked? Or really not that surprised?

It's not an unheard-of practice for Americans, as 59 percent of U.S. parents admit to having sex while an infant is in the room, according to the Huffington Post. But according to a new survey by Swedish mom magazine mama, three in 10 Swedish moms carry out the act with their tyke lying in the same bed.

One reason may be that bed sharing – that is, parents who co-sleep with their young kids – is more widely accepted in Sweden than it is in the United States. A 2005 Swedish survey found that the Swedes often have their children sleep with them until they reach school age.

That cultural gap is definitely evident across the web, with many U.S. parents struggling to wrap their brains around how mom and dad can even think of being intimate with a child in the same bed.

"I just don't understand how anyone could get jiggy with a baby or child lying next to them in bed! It's icky to say the least, and it's the last thing that would be on my mind while lying next to my child!" Lara W commented on NetMums.com, "How on earth could you get in the mood to bump uglies with a child lying there!! Yucky, horrid, makes me shudder!"

That said, others don't see the harm, arguing that most babies will probably never remember the incident – even if they're awake.

Debvolat comments on a Huffington Post article that having sex isn't the worst thing parents do in front of their kids.

"Many couples argue and fight in front of their children," debvolat says. "I'd rather my children peacefully sleep in the presence of their parents' lovemaking."

Many suggest that parents at least find a different room for private time if their infant is asleep in the bed.

But do any of us remember much of anything at all from our early years? I think I can recall glimpses of memories like still frames in my head. But even if I had witnessed such a thing, I would certainly have not been able to comprehend it at the time – let alone recognize it for what it was.

Whatever your solution, be prepared for intense scrutiny if the topic pops up during your next play date. There's hot debate on both sides of the issue!