Tanorexic Mom vs. Human Barbie Mom – Clash of the Weird 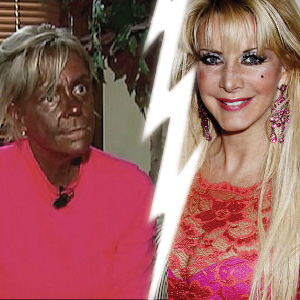 Ding-ding-ding! Welcome, southeast Michigan moms and dads, to our first-ever Oh Mother face-off, where we pit two of the most peculiar parents from the wonkiest recesses of the web. They'll get their virtual dukes up to vie for the coveted OM championship belt (crafted of the finest polystyrene and push-pins). Now, get ready to meet our contestants!

In this corner, we have Patricia Krentcil – better known as the "Tanorexic" mom – a leathery-skinned New Jersey woman accused of taking her young daughter along with her into a tanning bed. And, kitty-corner, is the impossibly proportioned "Human Barbie" mom, aka UK mum Sarah Burge, who treated her little girl to the gift every Skipper dreams of: an IOU for plastic surgery.

Mirror, mirror on the wall – who's the weirder looking gal? Barbie Mom's sunk some $800,000 into some 100 plastic surgeries, literally from head to toe (she's hardcore, too, staying awake during her operations and doing her own Botox injections) – rendering her a buxom, taut and tucked 51-year-old who, to her credit here, is utterly unapologetic. Granted, it all began with good reason: Burge was a domestic assault victim who was badly beaten, leaving her face severely disfigured. But after plastic surgery fixed that, something snapped. "Obviously, I got addicted and got totally carried away!" she says with a laugh. Bam.

But wait! Tanorexic mom swings back with a fake 'n bake habit that spans 10 years – the 44-year-old hops in-between the UV tubes 20 times a month for about 12 minutes a pop, according to the salon from which she's now been banned. Her eerie, bronzed-up look's been lampooned by everyone from reality vixen Kim Kardashian to Kristen Wiig on SNL – which Krentcil called "well done."

Oo! For that (unintentional?) pun alone, we hand this round to the Tan Ma'am.

Krentcil's looking confident now. The mom of five vehemently denies prosecutors' charges that she took her red-haired, porcelain-skinned 6-year-old daughter into a tanning booth – declaring, "I'm a great mother, I'm a wonderful mother." The whole fiasco was a major misunderstanding, she said: A school nurse asked little Anna how she got sunburned, to which the kid replied, "I go tanning with Mommy." Sure, Anna tags along. But in the tubes? Nope, mom contends: It was a straight-up backyard burning. Hmm. The jury's out, but seems a weak shot.

Not so with Barbie Mom, who's all pink-lipsticked smiles defending the $11,000 gift certificate for liposuction she gave Poppy, her diva-in-training 7-year-old, for Christmas. In fact, for this kiddo, it's old hat: She's also got a voucher for breast augmentation, all prime for her to cash-in on by her 16th, if she wants. Poppy, whose mom's also taught her how to pole dance, apparently "begged" for the future boob job, British tab The Closer reported – and said, "I can't wait to be like Mummy with big boobs. They're pretty." Did we mention Burge, also mom to three other older girls (Hannah got her first shot of Botox at 15), reportedly hosts plastic surgery parties (she's a trained aesthetician) and a swingers' club with hubby, too?

Pow! This round goes to the Mattel mimeograph.

We've got ourselves a tie! For the break, we'll have these mamas spar over "fake." Burge, with her innumerable implants and injections, has been touting herself as the "Human Barbie" for years – and she's got the tiny waist, flawless face and long locks to prove it. That's a heavy hit.

What's this, though? Unbelievable! In just a couple weeks of press, Tanorexic mom has her own action figure! Complete with an orange-socked face and straw-blond plastic hair, this truly fake, actual doll can be yours for just $29.95. A bit more than your average Barbie, true – but a bargain compared to that $800K tab.

And it's Krentcil for the K-O! (That belt will go great with her charred glow, don't you think?)