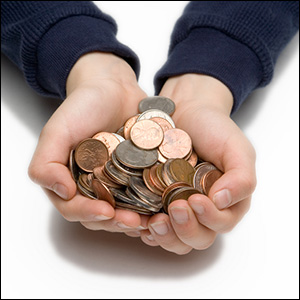 Among kids, potty accidents happen. But two accidents in the same third-grade classroom in one day? Now that's odd.

As it turns out, both students reportedly wet themselves because they couldn't afford to use the bathroom. Wait … what?!

Apparently, the kids' teacher at Mill Plain Elementary School came up with a specific classroom system. Earn play money, and you can buy special treats! What a good idea for teaching money management. Except the fake currency was also used to buy potty breaks, according to Washington news station KIRO-TV. The station reported that when the two students decided their money would go toward treats, they didn't have the funds to use the bathroom.

"What kid is going to spend money to go to the bathroom?" Merchon Ortega, mom to Lilliana, who had the accident, told KATU News. "No child should have to pay to use the restroom. Are you kidding me? That's absolutely insane."

Uh, DEFINITELY insane. As a parent, I'd be outraged, too. Mom Jasmine Al-Ayadhi also spoke out to KATU News about her frustrations after finding out her daughter Reem had an accident due to the teacher's policy. She told the station her daughter wanted to spend her last $50 on popcorn to follow along with friends, but she also needed to go to the bathroom.

"When it comes to a bathroom issue, when a child has to pay money to use the bathroom, that's wrong," she told KATU. "It's inhumane. That's a health issue."

As a result of the accident, her daughter had to wear boys' basketball shorts and was teased for both the accident and the clothes, the third-grader told the station.

KATU News did report that both students had $50 available at the times of the accidents. Lilliana didn't want to use the money for a bathroom break, and Reem was down to her last $50 but also wanted popcorn. But does that make it any better, really? Earn the fake money for treats, fine, but having to use the restroom is a basic bodily function that needs to happen – otherwise it can lead to health issues. I can't imagine why the teacher didn't see this as a bad idea from the start.

I also have to wonder how Lilliana and Reem will feel in the future about their moms spilling the details of their accidents on TV and having stories all over the Internet. Poor girls.

The school district did speak out, telling KIRO-TV that the school's students aren't kept from using the bathroom and this definitely isn't a district policy. Because of the "pay to potty" screw up, the teacher in question is under investigation.