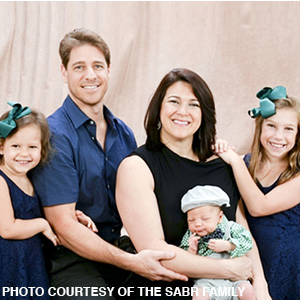 You can follow Kanye West and Kim Kardashian's footsteps by naming your baby "North" – or channel Gwyneth Paltrow and Chris Martin with the moniker "Apple." But mixing your last names together to form your baby's surname? That's going too far – at least in Tennessee.

When Kim Sarubbi and Carl Abramson got married, Sarubbi knew that she didn't want to change her surname, but also thought it was unfair to name their kids solely after herself, so the couple compromised and came up with a mixture of their names: Sabr.

Their first two kids share the name Sabr and the family uses that name on their doormat and in their Christmas cards. In fact, other than a minor snafu with airport security when their eldest daughter was a baby, the compromise has worked out well for the Sabr family, that is, until the family moved to Tennessee and had baby No. 3.

The Sabrs had decided that they would call their son Camden Sabr, but soon after coming home from the hospital the family received documents with the name "Sabr" crossed out. They couldn't choose that name.

Eddie Weeks, the state's law librarian, told NPR that a Tennessee law dating back to the 1970s prevents parents from combining "two names in any way other than the whole last name of both parents, or either surname of either parent."

Because of this law, the Sabrs could go to court and pay $150 to change their son's name away from the surname of their other two kids, which they don't want to do.

So far, there are mixed reactions to the parent's decision. Some, however, are siding with the state, claiming that the desire to create a whole new name for your family violates traditional family values.

Sue West, a commenter on Nashville Public Radio writes, "What happened to pride in your name? Women used to marry (a) man and be proud to take their last name and all the children would have same family name. My parents were divorced and my mother's signature was different from my last name and it made me feel badly. It's sad that today since no one seems to take marriage or family, seriously, that has now become the norm. We live in sad times."

Others disagree and find that pride in a name is exactly why men and women should be willing to compromise.

"I think the fact that women have pride in their names is exactly the point. Why can't a man change his name and then give the children the mother's name? I also have friend who gave their children different last names – one has the father's name, one has the mother's name," Meredith MacVittie says in response to West's comments.

Whether this trend of mashing surnames is a violation of traditional values is really a matter of personal opinion, but Laura Carpenter, a sociology professor at Vanderbilt University says the trend, though still rare, could show that surnames aren't as important as they used to be.

"Passing on last names could be becoming less important as divorce is becoming more common and people grow up in families with three or four different last names – and that's not uncommon," she tells NPR.

Right now, Abramson is on a mission to fight, and change, the law so that he, his wife and others out there can truly choose what to name their kids.