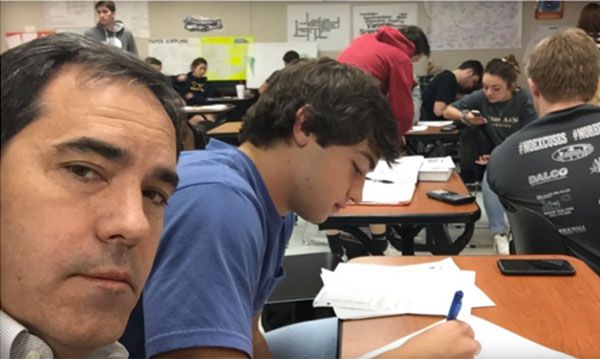 No one wants to go back to high school. Or at least we don’t. The days of stressing over prom dates and geometry pop quizzes are over, and we couldn’t be happier. Not that high school is terrible – stay in school, kids – it’s just something about the braces and the cliques that’s unappealing.

Brad Howard of Rockwall, Texas, however, decided to step back in time and sit in on his son’s physics class to teach him a modern-day lesson.

Empty threats only work for so long, after all. At some point, as a parent, you have to follow through. And boy, did Brad Howard follow through on this one.

After receiving complaints about his too-chatty-in-class son, Brad Jr., from his teacher at Rockwall Heath High School, Brad Sr. threatened to sit in on his physics class if he got one more complaint, reports Fox 4, the network station in Dallas-Fort Worth, Texas.

And, well, that complaint came – and along with it came a new student in physics.

Brad Sr. admitted he was more uncomfortable in class than his son.

“As the teacher began to teach, all of a sudden I began to think to myself, ‘What if she calls on me to answer a question?'” Brad Sr. said in the report.

Remembering last night’s dinner is hard these days, let alone trying to pull out physics knowledge from the dusty corner of our brains.

As for Brad Jr., it seems he might take his dad’s threats more seriously in the future. As he told BuzzFeed News, “I pray it was a one-time thing. I don’t think I’d ever do it again.”

Digging out our faded varsity jackets may be worth it after all.

Is stepping back into the halls of high school worth it to teach our kids a lesson? How else could Brad Sr. have addressed the problem with Brad Jr.? Let us know in the comments below.