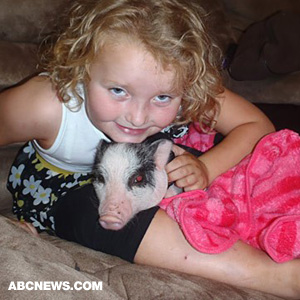 While bringing home a pet may seem like a good way to introduce responsibility to your kids, Alana Thompson – the former Toddlers and Tiaras diva better known as Honey Boo Boo to her fans – received Glitzy the Piggy (who has her own Twitter account) as a consolation prize after a recent pageant defeat.

Never mind that, just as quickly, the teacup pig wound up shipped back to her breeder – an ordeal that unwound dramatically on a recent episode of TLC's newest hit reality and T&T spin-off, Here Comes Honey Boo Boo.

But not before causing quite a stir. What seems like just an innocent pet – though far from most tots' first goldfish – had viewers commenting on the little pageant queen's lifestyle.

Before the split, Boo Boo declared her plans for the swine – which involved much more than teaching her to sit ("Someone save me!" Glitzy tweeted.)

"Glitzy, we're going to the prettiest girls at the pageant. And there's no way we can't win, because I got me a pig," said the spunky, finger-snapping 6-year old in a clip from Here Comes Honey Boo Boo, which follows a notorious pageant mom and her little glamour gal to their home.

Showcasing family life in rural Georgia, the show stars "a-dolla-makes-me-holla" Alana herself who, when she wasn't briefly dressing up Glitzy in hopes of snagging the next contest crown, has been chugging mom's homemade "Go-Go Juice" – a Mountain Dew, Red Bull and Pixie Stix powder concoction. Next on board is Alana's mother June, pregnant at 15 years old, with a history of child support payment theft and better known as "the coupon queen," who claims that her clipping addiction is "even better than sex." Audiences have also met June's baby daddy, "Sugar Bear" Mike, and Alana's three older sisters, "Pumpkin" Lauryn, "Chubbs" Jessica and 17-year old pregnant "Chickadee" Anna.

With a premiere that drew in 2.2 million viewers, some were wrinkling their snouts wondering how "The Learning Channel" has drifted so far from education and into what many are calling "the redneck equivalent of Jersey Shore." One viewer even said, "I would rather watch a show about the pig being held than the one that is holding it."

Honey fans have argued back, saying the show portrays a real family – "honest, thrifty, kind and full of love" – despite their quirks. Eve Vawter, a writer for Mommyish.com says, "There's a lot to be judge-y about the Thompson family, and I'm sure some people will. But at the end of the day, they're just a family who seems to care a whole lot about each other, enjoying the life they have made for themselves, and there's no shame in that."

Because the show already seems to be a guilty pleasure for so many, the fate of its continued airing seems promising at the moment. But Alana will have to solider on without her piggy pal. "I hope Mama don't eat Glitzy," the tyke had declared. "She eats everything else."

No need to fret: Glitzy is alive and well back at her Posh Pigs digs, which has a webpage dedicated just to her. Seems the reason for the split was more classic family pet challenges than anything – like too-little help from her pint-sized owner.