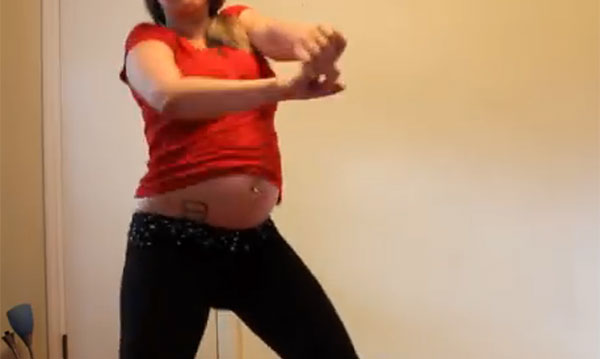 Thanks to Miley Cyrus and Nicki Minaj, twerking has gone from strip clubs to dance floors across the country. It has become the newest YouTube sensation – and women, men and kids are all showcasing their twerk skills. But now, according to ABC News, the sexy sensation has exploded in popularity for a new group: pregnant women.

Moms posted their “third trimester twerking” videos to a forum on BabyCenter.com and from there, the latest twerk trend took off.

Twerking, which was recently added to the Oxford dictionary, is defined as “dance to popular music in a sexually provocative manner involving thrusting hip movements and a low, squatting stance.”

And if you haven’t already tried it for yourself, know this: Twerking is going to make every part of your lower half bounce and jiggle.

So is that much movement safe for a pregnant mom – and her unborn child?

Exercise is encouraged during pregnancy, but it is suggested, according to Parents.com, that you seek advice from your doctor before you work those hips on overtime.

This new trend has the blogosphere buzzing – with some commenters saying it’s dangerous – and others noting that moms just want to have fun. In response to the ABC News article, commenter MAL says, “Notice the article is all about the pregnant woman: is she healthy enough; it makes her feel good. What about the baby whose world suddenly begins violently bouncing around in all directions? I would like to see some research into how safe this ‘fun’ activity is for the child. You know, the REASON this woman is pregnant?”

On the other hand, the videos posted on BabyCenter.com’s forum have gotten much support. On the Parents.com article, Cintia Sandoval Campos says, “Why do women suddenly think that just because you are pregnant that you are disabled!?! Wtf pregnancy is not a disability. You can jog, you can jump, you can dance, you can have sex and you can even walk some stairs!!! There is nothing wrong with this video!”

It’s a tossup on this one, folks.

Those twerk moves likely contributed to that bundle of joy you’re carrying – and hey, we don’t begrudge you for those mad hips skills. But you might want to cool it down until after the baby is born. Exercise is one thing. Rapidly shaking and bouncing? That’s a whole different story.