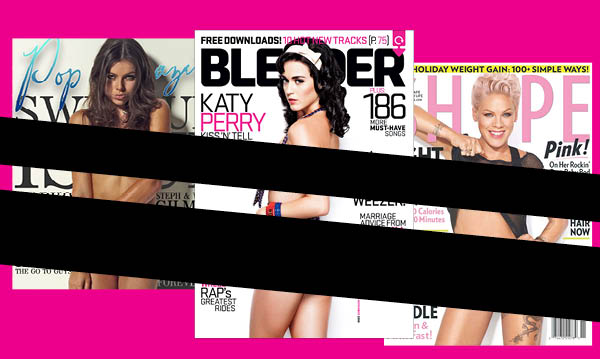 It's one thing to keep your kids from being exposed to certain things you find inappropriate, but it's something entirely different to try to try to keep the entire population of local kids from it.

Take those copies of Cosmopolitan or Women's Health, for example. One mom from Sandy, Utah, thinks the magazine covers are too racy for her kids – and wants things to change.

Adrianne Thygerson is fed up with what she see as "soft pornography" on magazine covers and is now calling for stores to place blinders on certain magazines, The Salt Lake Tribune reports.

She and her 7-year-old son were walking through a department store checkout line when all of a sudden her son blurted out: "I hate magazines."

Upset by his response, the images on these magazines and the fact that she believes kids are being exposed to these things too early, Thygerson rallied up other moms in the area and approached city council. The Sandy City Council listened to these concerns and engaged in discussion about what could be done. But, action has not been taken yet.

According to the Standard Examiner, this isn't the first time the public in Utah, "where an estimated two-thirds of residents are members of the conservative Church of Jesus Christ of Latter-day Saints," has freaked out over racy images. In fact, two women got upset about a Carl's Jr. campaign – and one mom got mad about "indecent" T-shirts with pictures of models striking "provocative poses" in little clothing.

And while the city council seems to have sided with the moms, not everyone agrees with the conservative community. Some believe that youth exposure to certain things is inevitable these days (just take a look at some of these moments in seemingly harmless kid shows), and that it's the parent's job to keep their kids from certain things.

"I can see their point about wanting to protect their children but we don't want this to become another Bomont (Footloose) where people start banning or requiring blinders on magazines or whatever," Fox 13 Salt Lake City reader KILRAA says. "If you don't want your children to see it, point them in another direction or teach them that there will sometimes be things that they won't like to look at and to look past it. Doing something like putting "blinders" on the magazines is just showing and teaching intolerance."

So, what do you think? Would you prefer that stores have blinders on these magazines – or are you OK with your kid being exposed to these covers?