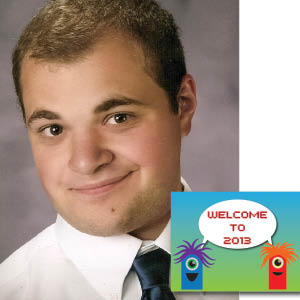 Monsters are taking over next year – for a couple of great local causes. Royal Oak teen and artist Dylan Yates, who has autism, has created a wall calendar featuring his illustrations of colorful one-eyed creatures.

This is the second year this local guy has created one of his calendars, which he designs using Adobe Illustrator. His knack goes way back: Dylan's mother, Donna, says he has always had an eye for design.

In the past few years, Dylan began flourishing in his visual imaging art class at Royal Oak High School (he graduated in 2012), learning graphic illustrating programs. "He manages to amaze his teachers and fellow classmates everyday with his excitement, creativity and problem solving skills," his website notes. His teacher suggested he put his passion for art together with his love of the holidays to make the calendar.

Last year, in 2012, that became a reality. Dylan created his first calendar, filled with his creation, and sold it online, giving portions of the proceeds to organizations that were important to him.

He's done it again for 2013 – and this time, the theme is monsters. Each month is adorned with Dylan's holiday and season-themed illustrations of one-eyed creatures. There's a happy hairy heart for Valentine's Day in February, pink mom and baby for Mother's Day in May, patriotic critter in July and, of course, Santa for December.

The wall calendars are sold on his website for $13. Proceeds from the sales will benefit Dylan, the Judson Center in Royal Oak and the Oakland County Chapter of the Autism Society of America.