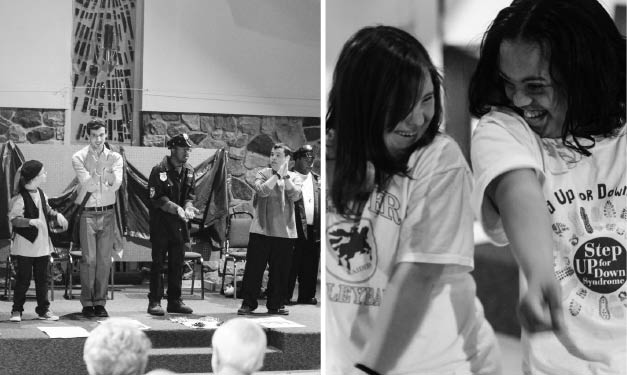 For kids with special needs, performing in a live show has many benefits. It can reverse the anxiety of socializing, help with movement and speech, and much more. But traditional theater programs may not always be a good fit for a child with unique challenges.

“Theater is a great medium for people with special needs,” Mann says. “Sometimes people think that because they have special needs, they don’t want to be on stage.” But in reality, it can be just the opposite.

Mann says one girl she worked with told her she liked that people looked at her because she was on stage – rather than because she has Down syndrome.

It gives the kids a “feeling of success,'” Mann adds.

4th Wall is a “mobile company” that brings theater programs to schools and therapy centers, so parents don’t have to drive far, explains Mann, a certified teacher, sign language instructor, choreographer and playwright.

“Fourth wall” is a theater term that means the separation of the audience from the stage, and the group aims to “break the fourth wall,” Mann says.

Rehearsals are weekly – running about eight to 10 weeks total – and meet for about 45 to 90 minutes. And it’s not just about prepping for a show: Youth learn about theater etiquette, stage terms and acting techniques.

Communication challenges are addressed, too. Beyond just verbal cues, instructors use both PECS (Picture Exchange Communication System) and American Sign Language to meet each child at his or her level.

Performances are typically only about 15 to 45 minutes, tailored to be manageable for kids depending on their needs.

Kids are the stars

Mann and Klark, a professional actor, singer and children’s choir director, run multi-week and day-long workshops that allow children of all special needs to write their own plays, pick their characters and perform the plays, too.

They get “such a kick” from being “writers and performers,” Mann says.

Plus, because the group services “everyone on the spectrum,” it incorporates sign language into the performances as well as dance and music – all great for helping kids with movement and sociability, she adds.

“(It’s a) great way to teach them these things, and they don’t realize they’re learning (them),” Mann says.

The group, which began in 2012, is a low-profit company, but Mann says the program costs about the same as “your typical dance lesson” – and they’ll drive just about anywhere.

“We will go as far as we can drive,” she says. “If there’s a need, we can certainly be there.”

To learn more, visit the 4th Wall Theatre Company online – or email the group at 4thwallkids@gmail.com.