Raising a Child with Autism Along with a Neurotypical Kid

Finding out her son had autism wasn't easy for Milford mom and nurse Kelly Miltimore. After trial and error, she offers insight on raising a child with autism along with a neurotypical kid. 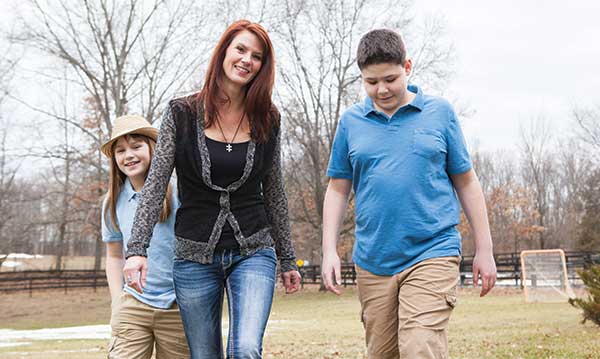 Every day is a delicate balancing act for Kelly Miltimore, a Milford mother of two. She has to juggle the responsibilities of a son on the autism spectrum and a neurotypical daughter. The demands of therapy combined with her son’s anxiety, depression and sensory issues mean that Miltimore is constantly challenged with supporting her son, Liam, and maintaining a normal life for her daughter, Mira.

Miltimore’s experience with her son and daughter led her to write the book A Zebra in a Field of Horses: One Parent’s Candid Truth About Raising a Child with Special Needs. And on Friday, April 24, 2015, Miltimore lead a panel discussion at the Metro Parent Living with Autism Conference at the Detroit Marriott Troy.

“I had attended the Living with Autism Workshop about six years (earlier), when my son was first diagnosed with Asperger’s syndrome. I was like a deer in headlights. I couldn’t figure out how I got there, and that is when Liam’s diagnosis became a reality for me,” Miltimore says.

While Liam’s diagnosis didn’t come as a complete surprise to Miltimore, she admits that she is still in mourning – especially when he doesn’t meet a major milestone. This year, Liam transitioned to a specialized school after completing fifth grade in a mainstream elementary school.

“Last year was really tough, because I knew he wasn’t going on to middle school with his friends. We hit these milestones, and that’s when it can really hit you that your child is different,” Miltimore says. She added that, using her life as a road map, she wants to help others on the autism journey.

Prior to Liam’s diagnosis, Miltimore was a pediatric nurse working at the University of Michigan. She treated children for years, so after Liam was born, it didn’t take long for her to realize he was different.

“By the time he was 2 years old, I knew something was wrong. He never slept. Ever. I tried everything. Before kindergarten he was diagnosed with a sensory processing disorder and anxiety. He also had delayed speech. So when his kindergarten teacher approached me about having him tested, I wasn’t surprised at all,” Miltimore says. “He was already in speech therapy, but we started occupational therapy to help regulate his central nervous system. We developed visual scheduling to help him feel more in control and prevent meltdowns.”

When her daughter was born, Miltimore began watching for the signs of autism in her, as well.

“When Mira was born, she was very neurotypical, but she didn’t speak until she was 2-years-and-3-months old. Seeing as how Liam had delayed speech, I immediately thought she was on the autism spectrum as well,” Miltimore says. Mira wasn’t, but it was then that Miltimore’s life became more complicated.

A sense of normal

Life became about going to school and meeting with therapists. All the while, Miltimore was trying to give her daughter, who is three years younger, a normal life with typical experiences.

“I had a box of activities for her for the therapists’ offices. She also learned to see that time as Mom and Mira time,” Miltimore says. “Liam was busy doing his therapy and we were able to have some alone time, even if it was in the waiting room of a therapy office.”

She explains that she frequently has to deal with Liam’s issues at school or cart him to another appointment – and Mira was the one picked up by a friend or made to wait. She often misses out when her brother is having a bad day and requires more of Miltimore’s time.

However, Miltimore has done what she can to ensure the brother and sister have a good relationship. Miltimore often takes Liam to programs that allow Mira to participate too, such as equine therapy.

“I want to help both my kids become their very best selves. I wouldn’t want to make Liam typical, because that isn’t who he is. Instead, I want to help him thrive as himself. The same goes for Mira,” Miltimore says.

Living in the trenches

Liam has been hospitalized several times. On top of his Asperger’s syndrome, he is also bipolar. Oftentimes, Miltimore says, Liam is unable to put his emotions into words or feel comfortable in his own skin or even understand a slight deviation from an idea he had in his mind. This causes him agitation and frustration.

“Kids on the spectrum are like shaken pop bottles,” Miltimore says. “They don’t have the words, so that expression comes out physically. You can’t comprehend the scenario of not being able to handle your own child, but it’s a reality.”

Isolation is part of autism, Miltimore says. “We, the parents, tend to have less time. We don’t get babysitters who aren’t family, and sometimes it’s entirely too much work to go out. We try to micromanage everything. We are helicopter parents, but that’s because we set up the day around our kiddos. If someone comes in and tweaks the routine, it throws us off for a long time,” Miltimore says.

“I hit such a low point mentally, physically, spiritually and emotionally. People would tell me that I needed to get out. I would actually get mad because I knew when I got home these things would still be here. It wasn’t until later that I realized that was the exact reason I needed to do those things. It took hitting that low spot for me to discover that,” Miltimore says. “I needed to get those breaks. I was a better parent when I would come home.”

She also found strength in others within the autism community, including a friend she met at the conference.

“She and I can send a two-sentence text and then not talk for a month, but we know we have each other and we’re in this together,” Miltimore says.

“I hate it and I don’t hate it,” Liam says about Asperger’s. One of his biggest challenges, he says, is connection with people. “I wish I could spend more time with people.”

Just as his mother tries to maintain her relationships with her friends and support system and fosters a relationship between her children, Liam is working on his relationships as well.

With the help of a social worker in his classroom and in a school for kids with special needs, he’s learning to read social cues and interact with his classmates. “My new school feels like a match,” Liam says.

Miltimore says Liam has the ability to memorize details, has a vast interest in electronics and sucks up information like a sponge. She tries to focus his friends and activities around the things he is interested in.

Putting it all out there

As she worked through the juggling act of providing the best situations for both of her children, Miltimore documented the process. In 2013, she decided to take those notes and turn them into a book.

“I just thought, ‘If I can write this stuff down and if I could help just one person, it would make it all worth it,'” she says.

After discussing it with her family and contemplating the repercussions of making her private life so public, Miltimore set out to write A Zebra in a Field of Horses.
Miltimore says that years ago, she suffered several miscarriages. A friend gave her a book that changed her life because of the honest way it was written, and she wants her book to be that for someone else.

“I wanted to say the truth and not be ashamed of who we are. I wanted to be honest, especially for the families who are earlier on in their journey,” Miltimore says.

Later this month, at the Living with Autism event, Miltimore will share more of her experiences.

“This panel is going to focus on lessons we want to share – things that worked for us, but also our failures,” Miltimore says.

As a past conference attendee, Miltimore says the Living with Autism Workshop is among the best resources for parents of autistic children in southeast Michigan. She said the conference is very parent-friendly and offers a plethora of information on just about any topic parents might want.

“It can be overwhelming to get all of that information in one place, but this conference doesn’t make you feel intimidated,” Miltimore says. “My advice would be to identify your top three concerns and focus on those during the breakout sessions – and focus on finding resources for your needs.”

Canning or otherwise preserving food can extend the shelf-life of your produce but it's important you do it safely. A Macomb County food preservation expert explains.
Read more
Guides

Looking for things to do in Detroit – or places to visit? Veer from Motown's most popular spots to these family-pleasing cool Detroit attractions.
Read more
Early Education

What's the right time for your young child to start school? Metro Detroit early childhood experts weigh in on when to start kindergarten.
Read more
Health

What the Bipartisan Safer Communities Act Means for Families

This is the most significant new federal gun safety legislation in almost three decades.
Read more